RUGBYPASS+ Will the Black Ferns be bullied by the Red Roses?

By Nick Bishop
Will the Black Ferns be bullied by the Red Roses?
By
Nick Bishop
1 month ago
Women's Rugby World CupEnglandFrance
7:06am, 12 October 2022 1 Comments

The Black Ferns probably can still probably hear then-head coach Glenn Moore’s words ringing in their ears after a disastrous mini-tour of England and France at the end of 2021: “We were bullied. I’ve never felt that in here before – that we’ve been bullied.”

The New Zealand women’s team had just lost four consecutive matches: by 56-15 and 43-12 to England, and by 38-13 and 29-7 against France. Particularly in the doubleheader against the Red Roses, it was not just the defeats, but the manner of them which really hurt. There was little honour, and even fewer positives to be saved from those average 35-point losses, especially the two at Exeter’s Sandy Park and Franklin’s Gardens in Northampton.

Since then, Glenn Moore has departed amid controversy and accusations in the post-tour report of cultural insensitivity, ‘favouritism’ and ‘ghosting’ in a squad which is squarely based around a majority of Maori and Pasifika players. One of the most prominent, hooker Te Kura Ngata-Aerengamate, experienced a mental breakdown at the end of the tour because of the pressures involved.

England on who they want to face in the final

England on who they want to face in the final

The recommendations from that report were as follows:

Moore was replaced by the sharpest and most sympathetic coaching mind of the professional era – in either the men’s or women’s game – in Wayne Smith, ably assisted by World Cup-winning coach Sir Graham Henry, so there was certainly change ‘at the head’.

While that represents a huge upgrade in coaching intellectual property, fundamental problems still remain in the rest of the anatomy. The ex-Wales national coach and long-time head of elite coach development at the RFU, Kevin Bowring, once told me that “although the Northern Hemisphere was about three years behind the south when the [men’s] game turned professional around 1995, in reality the lack of readiness for the change cost us the better part of 15 to 20 years’ worth of competitiveness.”

There were long-term structural problems in the game in England, Wales and France around private ownership which took decades, rather than years to resolve. The situation is similar for the Black Ferns now. England offered their top 28 women full-time professional contracts back in February 2019, but it has taken New Zealand three years to follow suit. Those three years may yet attract the multiplier that Kevin Bowring flagged up. The lost ground will not be easily recovered.

Wayne Smith for one, is well aware that he is working from behind the 8-ball.

England are currently on a 25-game winning streak, with the benefit of those three extra years of honing of body and mind, and a fully-professional club league composed of ten different teams. As Graham Henry commented, “They [the Black Ferns] don’t play a lot, and I think that is reflected [in the performance],” while the English women have developed a playing model much closer to the men’s version of the game:

England can stretch the field with the boot, they can grind their opponents into the dust with the power of their lineout drive, and they have a better bench, with a bigger core of finely-tuned athletes than anyone else. It is a tried-and-trusted recipe for international success – just take a look back at the Springboks’ triumph at the 2019 World Cup.

Wayne Smith for one, is well aware that he is working from behind the 8-ball:

“The game has changed. You’ve got the early stages of the professional game here, and you’ve got women coming from Europe who have been professional for a few years. There’s been a lot of money poured into their game.”

Smith added, somewhat forebodingly, “The landscape is slightly different but the expectation remains.”

It will be fascinating to watch how the coaching intellects of Smith and Henry work to overturn the gap between one team which is only just emerging from the shadows of amateurism, and another which has been living the professional life in plain sight for over three years now.

Their charges struggled to beat the [amateur] Wallaroos from Australia in the opening round of the World Cup, falling 17-0 behind early on and only hitting the lead for the first time in the 56th minute of the game. Although they eventually eased away to a 41-17 winning margin in the final quarter, the performance lacked conviction.

As ever, ‘The Professor’ of modern rugby coaching will be looking to emphasize ball movement, keeping the pill alive at all costs and getting it into the hands of word-class outside backs like centre Stacey Fluhler, a star in the Sevens version of the game, and wings Portia Woodman and Ruby Tui as often as possible. Against the Aussies, the balance was not quite right, with 12 offloads in contact outweighed by 21 turnovers of possession.

Six of those offloads occurred in the final quarter, which was the only period of the game that the Black Ferns truly dominated:

This is a typical example of what New Zealand want – turnover ball in contact as the ball is first ripped away in the tackle by number 6 Charmaine McMenamin, then shifted even further away from the heavy traffic by two successive offloads from Amy du Plessis and Hazel Tubic.

If New Zealand can get the ball into space, Fluhler, Tui and Woodman showed that they are quite capable of overturning the odds, even when numbers are not in their favour:

When Fluhler receives the ball in the first instance, the Wallaroo defence enjoys a three-on-two advantage out towards the [Australian] right, but the Black Ferns’ centre is able to draw both of the last two defenders and issue an offload at exactly the right moment to cut Tui loose for the try. In the second, the Australians have an extra body (six versus five) as the ball is moved back to the short side, but Ruby Tui’s acceleration and footwork off an offload by Ruahei Demant outweighs the numbers game.

The England women are structured and methodical. They improved a 24-14 halftime lead over Fiji, piling on a further 60 points in the second period, and they based their success off the driving lineout:

This lineout starts fully 15 metres out from the Fijian goal-line but the drive rumbles all the way for a try. When the maul is such a powerful weapon, it naturally begins to contract the back-line defence as more defenders are pulled into the whirlpool.

The following lineout drive started even further out than the previous example, on the Fijian 22m line. It ground upfield for more than 20 metres and over 30 seconds before the ball was released to the backs:

As the ball reaches England number 10 Zoe Harrison, the last Fiji defender is inside the far post, so there is no chance of the fullback covering the cross-kick over to left wing Claudia MacDonald.

The next drive sequence advanced for 15 metres over 35 seconds and trawled in two penalty advantages along the way, before the ball was spread with the insurance risk fully covered: 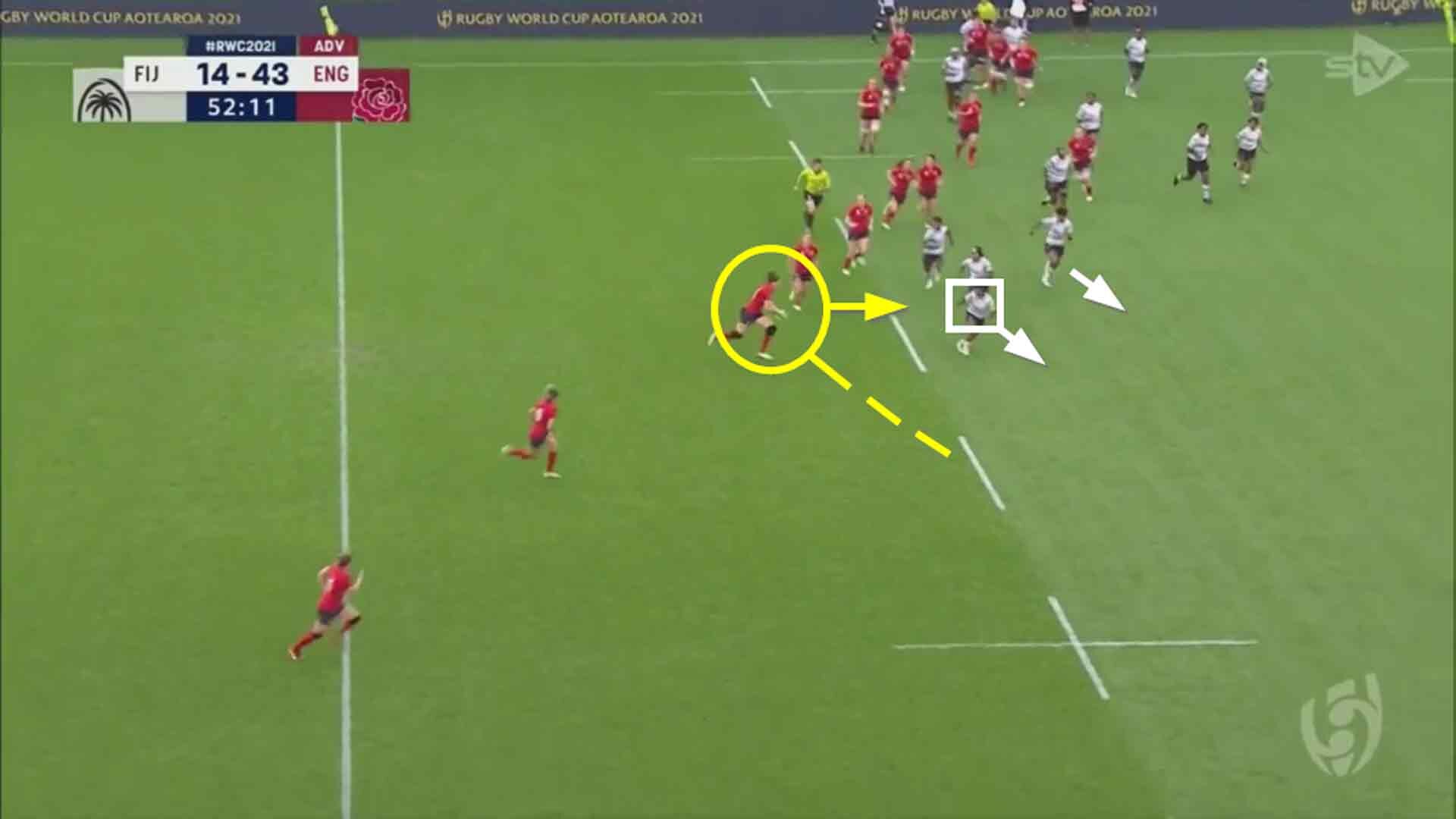 When England number 13 Emily Scarratt receives the ball, she already has the Fijian left wing Vitalina Naikore directly opposite her, and Scarratt is far too good a player to ignore the space outside.

There, in a nutshell lies the problem for the Black Ferns if they meet the Red Roses later in the competition. First you have to stop the England drive, then you have to find a way to counter probably the most complete midfielder in the world outside it:

Once again, it’s Scarratt versus Naikore in the midfield and the England centre’s hands are too intelligent for the defender. The back three beyond her (fullback Ellie Kildunne and injury returnee Abi Dow) are more than able to make hay from the sun shining inside them.

On the evidence of the first round of matches, the Black Ferns have a lot of ground to make up on their English and French rivals. Despite the presence of two of the modern coaching masterminds, ‘Ted’ and ‘The Professor’ poking and prodding them towards greater achievement, professionally the Kiwi women are starting the race three years behind the Red Roses. It will take a massive effort for them to overcome that handicap and stand up to the playground bully.