RUGBYPASS+ Man in the middle 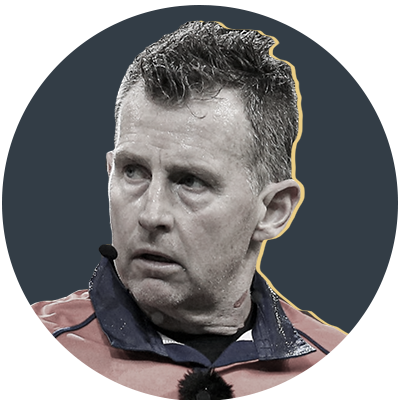 Communication has changed massively between the referee and players in the professional era.

I remember coming through when Ref Mic was introduced at the top level of the game. The reasoning was that it would help spread the game to a wider audience and appeal to casual fans as well as the traditional die-hard supporters. The upshot was that it changed the way a lot of referees conversed with players for good.

In the old days, we’re talking the era of Derek Bevan and Clive Norling, if a player was in your ear, you could tell them to ‘f**k off’ and think nothing more of it. Nowadays referees are not only communicating with the players but to a global audience of armchair viewers eager to understand why decisions were given. That’s brought a level of scrutiny that simply wasn’t there before.

With increased communication, players have started to have much more of an open dialogue with referees. It’s allowed them to question us. Now, as long as that’s not done too often and in the right manner, it’s not a problem, but it has led to players querying decisions or asking for incidents to be rechecked on the video replays.

Personally, I suppose it’s changed how I’ve communicated over the years. Believe it or not, I used to talk a lot more. Now I try and talk a bit less to get a balance right of actually communicating for the good of the game. It’s something I’ve actively worked on. I’ve rewatched matches and thought, ‘come on Nige, you’re talking too much, here, cut it down,’ and the next game you act accordingly.

What I really don’t like is this trend of refs calling players by their first names. For example, ‘James don’t do that, move away’, ‘Richie, step back’. I don’t like it because there’s no way you’re going to know every player’s name. Some referees call some players by their name and others by their shirt number, ‘No 6 or No 7’. That’s not fair. You can’t be too pally with players. You are there to do a job and they’ll respect you for doing it properly.

You can’t be too pally with players. You are there to do a job and they’ll respect you for doing it properly.

Don’t get me wrong, I do communicate with captains or address certain players by their individual names on occasion. If, for instance, I was refereeing the Scarlets against the Blues, as two captains, I would say to Steff Hughes or Josh Navidi, ‘come here Josh and Steff’.. Or if I’m asking Johnny Sexton on kick-off, ‘Johnny are you kicking left or right?’, it’s so I know I’m out of his way. It’s common sense rather than being too familiar.

Another shift I’ve seen is a lot of referees trying to ‘sell’ their decisions to the public or broadcasters to get them ‘on side’. If you make the right decision and explain why you’re giving it, you shouldn’t need to sell it to an audience. I’ve seen referees trying to make a decision sound better than it is. If you feel the need to sell the right decision, you probably haven’t made the right one.

Some big characters and names are vocal and put pressure on referees but some won’t put up with it. My advice to captains is to get to know the referee and know where the line is.

If you make the right decision and explain why you’re giving it, you shouldn’t need to sell it to an audience. I’ve seen referees trying to make a decision sound better than it is.

Another gripe I hear is that the language barrier is unfair, you know, referees not being able to speak fluent French but if you ask all the players or coaches, they’ll all tell you, ‘we don’t care what language you speak as long as you do your job’. Too much is made of it. They want the best referees, not the one’s who can speak the most languages. If you are going to learn French, why not learn Italian, Spanish, Welsh, Georgian, Japanese or Afrikaans. Where does it stop? The language of international rugby is English. I haven’t had any issues with any French players, and in fact one of the players I got on best with was Thierry Dusautoir. Even with the language barrier, he was always a pleasure to deal with.

Away from the pitch, you do converse with players on occasion, but if there’s been some controversy or emotions are running high, it’s perhaps not the best time for a conversation. These days the players go to the hospitality boxes before the food, to make a few bob and the away team will generally go for some food. If you’re away in Europe, or a Six Nations game, you go out for a beer and sometimes bump into players who will have a chat with you which is why I love the game. In my experience, there’s never been any hard feelings after the whistle is blown.

You get to know players as well. I’ve been around a long time so I’ve refereed many players their whole careers, especially here in Wales where Ken Owens lives up the road, Jonathan Davies isn’t far away and I bump into Alun Wyn Jones quite a bit.

I have spoken to referees before and after games who worry they’ll get another game. For younger refs who haven’t quite grown into their own personality, that’s tough.

One of my other main worries these days is that administrators want a referee to be perfect. It reminds me of the saying, ‘Don’t let perfect be the enemy of the good’ which basically means trying to make something perfect can prevent it from being a good standard. These days every single decision is scrutinised and referees are told ‘they’ve got it wrong’, but often it’s not wrong, it’s an opinion made in a split second that could go either way. The pressure is such that it’s starting to take the enjoyment out of the game. It will come to a point where the referee will go into the game fearful that they don’t get everything right which compounds the situation.

I have spoken to referees before and after games who worry if they’ll get another game. For younger refs who haven’t quite grown into their own personality, that’s tough. We can’t take the enjoyment out, otherwise, what’s the point?.

Looking ahead I want to continue my work with the WRU Academy and help out the younger refs. As my refereeing tails off a bit, I’m still keeping fit. I’m 50 next year and obviously there’s more and more emphasis on fitness scores but you’re better off having referees who can ref a game and do a good job than having a ref who can do a sub-11 second 100m and not be able to ref.

Like everything in life, there is a balance to be found.