RUGBYPASS+ Ireland v France: Is it better to play with or without the ball?

By Nick Bishop
Ireland v France: Is it better to play with or without the ball?
By
Nick Bishop
10 months ago
Six NationsFranceIreland
9:15am, 30 March 2022 Go to comments

One of the best Six Nations tournaments in recent memory has just finished.

The reasons why strong memories are created can be so very different. There were some fluttering markers in the sand: Italy won their first game in the Six Nations for seven years, with a try in Cardiff right at the death, on the very last play of the game. Scotland, meanwhile, have now won their last two Six Nations fixtures, home and away versus the auld enemy England, and they retained the Calcutta Cup for the first time since the 1983-1984 season, 38 years ago.

The England captain back in the day, Cardiff number 8 John Scott, came in for much the same vitriolic media criticism as coach Eddie Jones in recent times. The Guardian described his captaincy as “a disaster…he failed to lead, inspire or direct”, after England went down 22-12 on their own cabbage patch.

For students of the game itself, the 2022 tournament created a very distinct set of memories. The radically different styles of play adopted by the two dominant teams in the competition, France and Ireland, created an unforgettable visual impression.

Between them, the top two lost only one of their 10 matches – predictably, Ireland’s loss in Paris – while scoring 41 tries and conceding only 11 between them. They scored nine more tries than all of the other four teams put together and were the only two sides to finish with a positive difference between tries scored and conceded. Where France and Ireland emerged at plus 30, everyone else stood collectively at minus 29.

There was a huge chasm in quality between the two main rivals in the joust and everyone else, but they reached the same level through tactical routes which were as alike as chalk and cheese. Apart from starting with fifteen players on the pitch, the two teams had virtually nothing in common whatsoever.

Here are some of highlight raw stats:

If some very large question marks are rising above the heads of the casual rugby observer, they would be right to be confused. How can two opposite playing philosophies produce such very similar results?

Let’s go back to the single most emotive memory of the final round, Italy’s last-gasp game winner against Wales, for the clues to French success:

Wales have kicked long, from a position just inside their own 22, to Azzurri fullback Ange Capuozzo. The men in red have gained territory – the ball lands inside the Italian 40 metre line – but they have traded length for a temporary loss of defensive shape. Their three chasers are facing Capuozzo initially, but crucially they have only shut down access to one side of the field, the Welsh right, on the return.

The chase to the other side is strung out over 15 metres of depth, which means that the defenders cannot help each other out. If Capuozzo has the vision to realise where the opportunity lies, and the footwork to take it, he can pick off single chasers one by one. In the event in question, he has, and he does. He spots the gap between the last forward (Taulupe Faletau) and the first back (Josh Adams) and the rest, as they say, is history.

The bare bones of the play are that Ange Capuozzo only has to beat two defenders (Adams on chase, and Dan Biggar in cover) and make one pass to Luca Padovani while setting up no rucks at all. It is the simplest and most efficient way to score.

This is one lesson that France has clearly learned. Ten of their 17 tries in this year’s Six Nations came from kick or turnover returns, and only one of those 17 scores took more than three phases to achieve. Compare that to Ireland, with only eight tries out of 24 from the same source, and just over 50 per cent coming within phases 1 to 3.

Let’s look at some of common themes that emerge from France’s ability to run ball back, and tune in on an attacking wavelength from changes of possession. The critical try against Wales in the fourth round of the tournament illustrated their patience, waiting for the right moment to strike off the long kicking game. 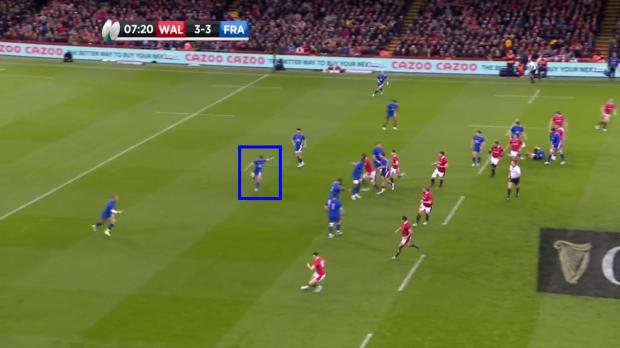 The first snapshot represents France’s first returning opportunity in a sequence of four kicks (two by each side); the second frame is the fifth play, and the difference is clear and obvious.

With the ball on the French 30-metre line and eight Welsh defenders within 10 metres of the ball carrier, a kick is in order. With the ball further upfield and only one Welsh defender in shot, France fullback Melvyn Jaminet is ready to counter with ball in hand:

As in the Italy example, the ball is brought back to the short side, and the break is made between the last two defenders in the Welsh chase line. Three phases later, and the ball came back to the same side for the only try of the match:

On this occasion there is a Welsh forward defending next to his right wing (Alex Cuthbert) and France enjoy a big advantage in numbers in the area.

It was the only time in the tournament where France needed more than three phases to convert an attacking opportunity. The climatic encounter against the All Blacks in last year’s Autumn Nations Series set a pattern in which either they made a break, or scored earlier in the sequence:

Once again, the first instinct of the receiver (number 10 Romain Ntamack) is to move infield and bring play back to the shorter of the two sides, with a pass back out to Jaminet near touch. Two phases later, France were fully regrouped and ready to shift the ball wide and create space for wing Damian Penaud. They scored their second try of the game shortly afterwards.

At the apogee of the match, application of the same principles changed the momentum of the game for good:

Under the most severe of pressure in his own in-goal area, Ntamack finds the smallest of holes down the short-side to break out with Jaminet. Within two phases, France had turned goal-line defence into goal-line attack, won a penalty under the Kiwi posts and drawn a yellow card on a desperate Ardie Savea.

Unlike Ireland, France do not want to work the defence over via a long string of phases with consistently quick ruck ball, they want to strike fast and hard off changes of possession. 10 different French players won turnovers at the breakdown this year, and six of those were in the top 15 performers in the entire tournament.

Two of the top three off-loaders in the competition were also French (scrumhalf Antoine Dupont and prop Cyrille Baille) and they were both key to a spectacular kick return try against Scotland at Murrayfield:

First Dupont runs the ball back all the way from one 22 to the other, then Baille crosses from the right to the left of the field to become first receiver on the following phase. A quick offload in contact from Penaud creates the scoring chance for second row Paul Willemse to finish off.

Three phases, three passes, one ruck and the better part of 80 metres covered. It is that kind of economy on the counter-play which won France the Grand Chelem.

It is probable that other international sides will polarize as the World Cup in 2023 approaches, either tilting towards Ireland’s fluid, all-action possession game or France’s heavier counter-puncher’s approach, fighting in bursts. It is the contrast in styles which makes that tournament something to savour.