By Nick Bishop
How the north have gained parity and taken control of the rugby world
By
Nick Bishop
4 months ago
InternationalArgentinaAustralia
9:22am, 13 September 2022 1 Comments

It is now one calendar year, almost to the day, before the World Cup in France kicks off on 8th September 2023. The countdown has begun in earnest, before that firecracker of an opening match, between the hosts and the All Blacks at the Stade de France, marks the start of the biggest tournament in world rugby.

It probably represents the Northern Hemisphere’s best opportunity to win the William Webb Ellis trophy since Sir Clive Woodward’s English chariot brought home ‘Bill’ from Sydney 20 years ago, back in 2003. That England team won the competition because they were prepared to go against type. England had always been dominated by the northern stereotype of huge forward packs and the kicking game until that moment.

What convinced Phil Larder, an ex-Great Britain Rugby League coach to switch codes in 1998, was Woodward’s vision of how the game could be played at national level, as told in his autobiography The Iron Curtain:

“Clive said to me, ‘Phil, I am more interested in defeating the three teams from the southern hemisphere than winning the Six Nations. South Africa, Australia and New Zealand are by far the strongest sides in the world at the moment and I want to test myself against them.

“’Do you know that between them, they have won all the four World Cups up until now [1987-1999]? I want England to be the first Northern Hemisphere nation to win the Rugby World Cup, and I want us to do it by playing quality rugby, not by just kicking the ball down the f***ing pitch and running after it.’”

Although Larder was given a few weeks to make his mind about taking the opportunity to become England’s first Leaguer defence coach, in reality he already knew the answer after that meeting. England were not going to play ‘kick and clap’ rugby anymore, and that gave them the extra edge they needed over the following five years.

Wind the clock on another 20 years or so, and that desire to match not only brawn but also brains and skill-sets with the south has spread out much further than just one nation under a very particular coach.

A comparison of some of the key attacking stats between the current Rugby Championship played out so far among New Zealand, Australia, South Africa and Argentina (round five will be played this coming weekend), and the Six Nations tournament at the beginning of the year, makes for interesting reading.

20 years ago, the south was the undisputed king of multi-phase, running rugby, and some of the more negative observers in the north used to spit out their dummies, in caustic criticism of the ‘basketball’ panoply of passing and offloading skills. Teams from Super Rugby were all free-scoring and did not feel the same need to engage in grinding wars of attrition in contact as their counterparts in the northern clubs.

The stats paint a very different picture from the situation which confronted Woodward and Larder at the turn of the millennium.

The stats from the two major international competitions no longer support that view:

Overall, the stats paint a very different picture from the situation which confronted Woodward and Larder at the turn of the millennium. Even the try-scoring distribution during the July tours of the south by the north diverged strongly from the historical pattern.

On the four major tours (England to Australia, Ireland to New Zealand, Wales to South Africa and Scotland to Argentina), the touring sides scored 33 tries while conceding 36. If you include France’s mini-tour of Japan (technically in the north but practically in the south), that becomes a 40-all tie.

The worry for the Southern Hemisphere is that sides from the Six Nations now know how to attack with ball in hand – not just ‘kick and clap’ – and they are far more confident of their ability to sustain their attacking momentum over longer passages of play.

Even before the momentous third Test between Ireland and New Zealand in Wellington, Kiwi scribe Gregor Paul had written, “Ireland have won four of the last eight tests these two have played. But more pertinently, it is how they have won — how they have played — that has tilted the balance in this rivalry.

Ireland, in the first two tests of this series, have played almost exactly how the All Blacks want to play, but are not good enough, or cohesive enough to fulfil their own ambitions.

At the moment, it is almost as if Kiwis are having to get their rugby fix vicariously through the Irish: they can see that Ireland’s players are smarter, tougher, and better drilled.”

After another four-try, series-winning performance, you can make that five wins out of eight. Ironically, the All Blacks are now looking to Joe Schmidt, a coach who honed his craft with Leinster and Ireland, to revive their attack.

Let’s look at some of the reasons why the north will present a more realistic challenge to win ‘Bill’ than at any other time since 2003. Firstly, the accuracy and attention to detail in and around the ruck. This try comes from Ireland’s victory over the All Blacks in November 2021:

It looks like a very simple try, only three phases in total, but it derives from the ability to perform a lot of little tasks around the breakdown to a high standard. Lineout delivery from the front is not typically viewed as gilt-edged attacking ball, but the work at the first two rucks make it so.

First, blindside wing Andrew Conway seals off the infield corner of the first ruck, then the two Irish second rows (James Ryan and Tadhg Beirne in the blue cap) do the same at the second. At that point, they have taken out all of the New Zealand forwards who could wrap to the open side on third phase, bar hooker Codie Taylor, who was standing out of the lineout in the first place: 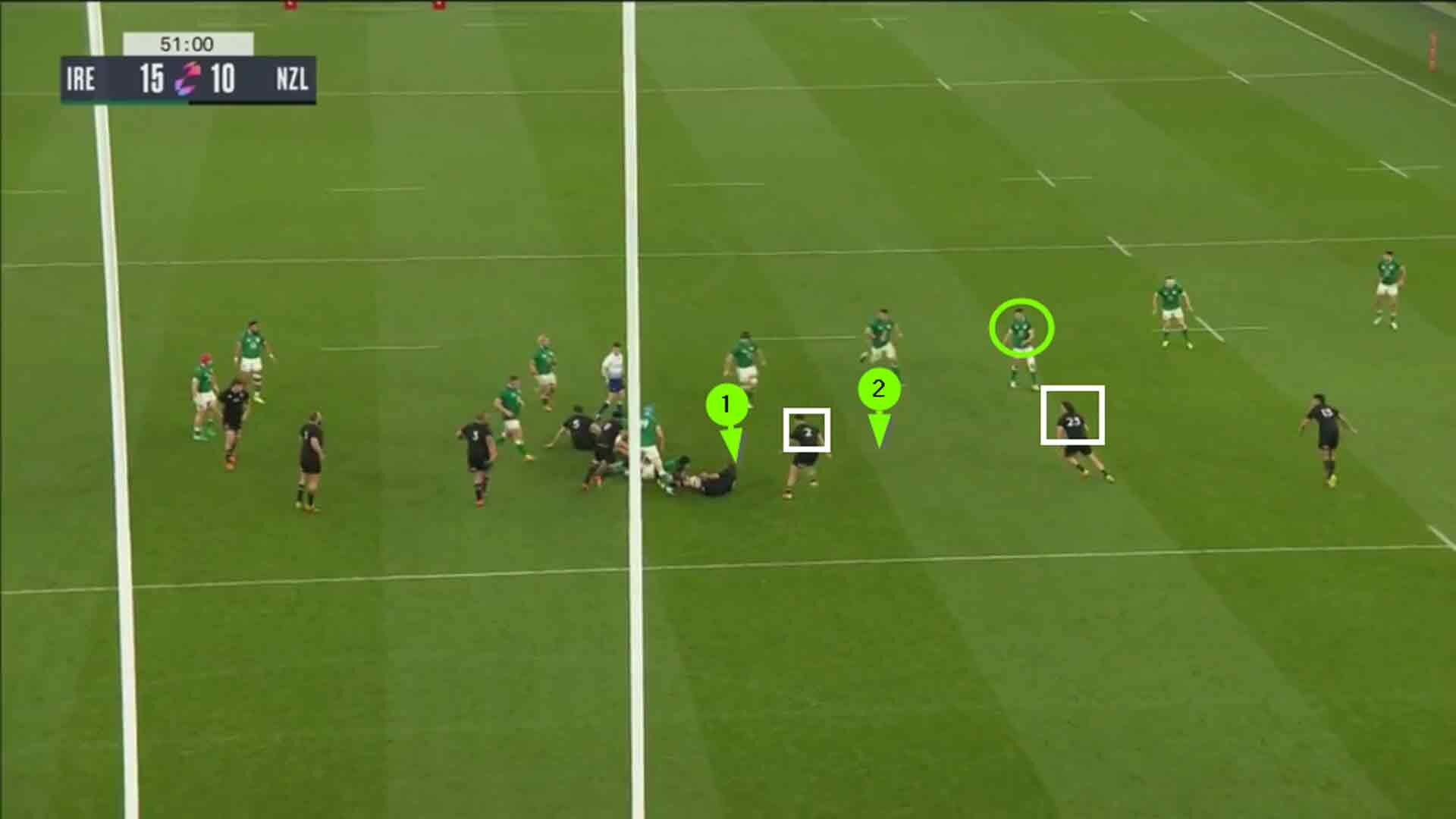 Taylor has to mark two Irish back-rowers (Caelan Doris and Jack Conan) with number 23 David Havili forced to stay out with the first back Johnny Sexton. And of course, the operation is all performed at speed, from three successive bits of lightning-quick, two-second ball.

Teams from the north have also developed their optimism in shifting turnover ball wide early in the phase count, another traditional strength of the south. This example comes from Wales’ first Test in South Africa:

It is only the second minute of the match, but there is no hesitation from Wales in going straight to width off a Springbok lineout turnover. The passing is all crisp and out in front of the receiver, and Wales know that if the ball gets to the edge, it will reach the fastest man on the paddock (Louis Rees-Zammit) with his opposite number (Makazole Mapimpi) likely to jam in on centre George North: 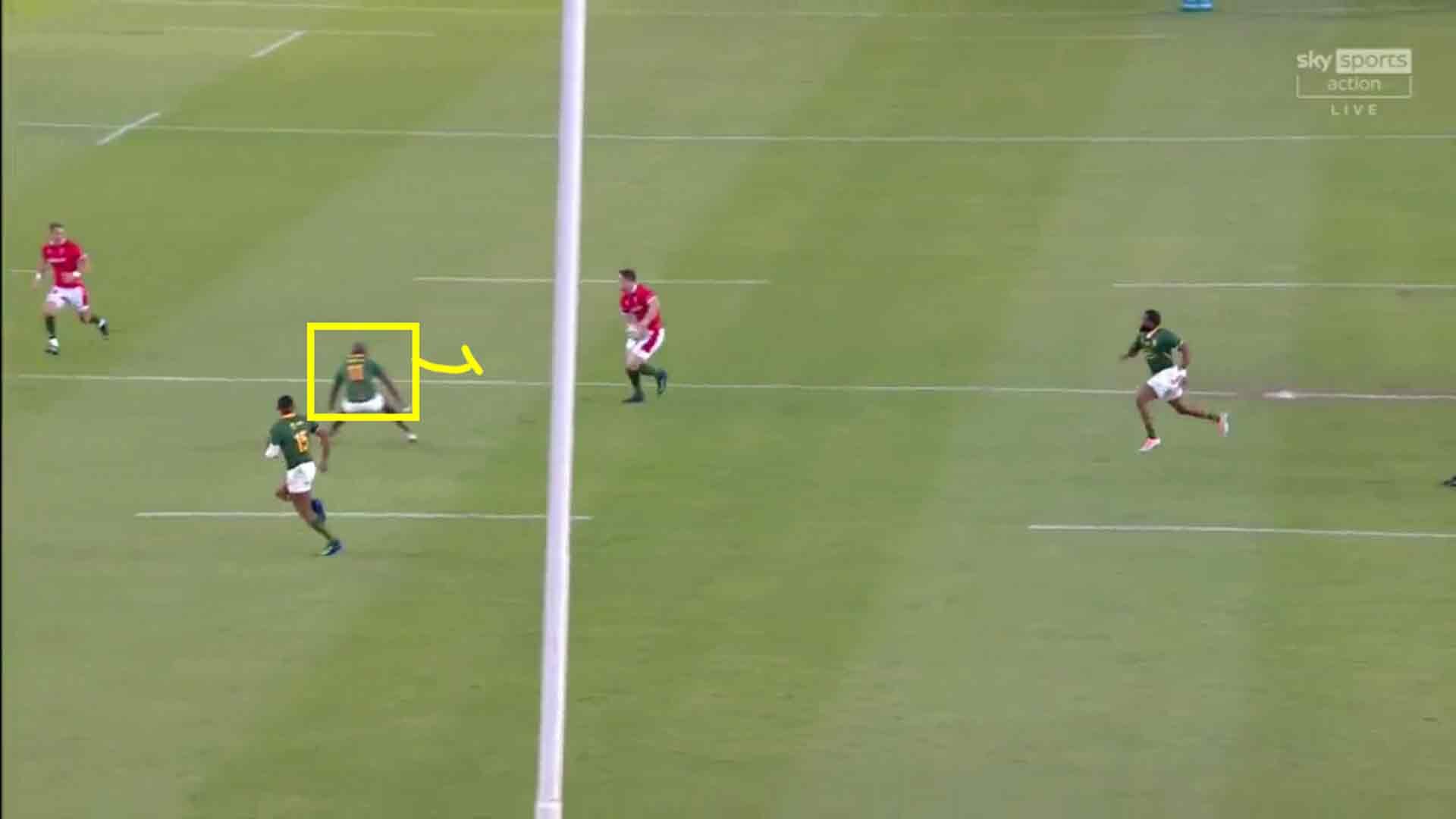 Twenty years ago, any good rugby man or woman would have been unable to contain their mirth if you were to suggest that players in the north could offload the ball as well as their counterparts in the south. Not so now:

That is four offloads in the space of three phases by Scotland against Argentina, executed in the teeth of a defence which prides itself on its hitting power. The final one between Saltire number 10 Blair Klinghorn and left wing Duhan van der Merwe punctures the last line of resistance and hammers home the score beneath the posts.

The host of the 2023 World Cup are France, and they have conjured memories of their mercurial past with some of the performances in the most recent Six Nations. Once again, the ability to offload in contact is the key to the continuity of attacking play:

The passing across the face of the Scotland defence is slick but there are still defenders to spare when the ball reaches wing Damian Penaud on the right edge of the field. It is the two extra passes in contact from Penaud then prop Cyrille Baille which make all the difference between a try and the ball being driven tamely into touch.

The raw stats tell a very different story from the tale they would have narrated 20 years ago. Now, it is the north which leads the way in ball-in-play time, lightning-quick ball from the ruck and the willingness to undertake longer passages of multi-phase attacking play. The world has indeed, been turned on its head. It is a long time since Clive Woodward told Phil Larder he was not going to be satisfied with merely ‘kick and clap’, but maybe the right moment has arrived for the second Northern Hemisphere team in history to show that it capable of not only winning a World Cup, but playing a bit of rugby along the way.