RUGBYPASS+ Have the Springboks stumbled upon their World Cup backline?

By Nick Bishop
Have the Springboks stumbled upon their World Cup backline?
By
Nick Bishop
5 months ago
The Rugby ChampionshipNew ZealandSouth Africa
12:47pm, 23 August 2022 12 Comments

It looks like Jacques Nienaber is coming around to Nick Mallett’s way of thinking.

The ex-Springboks coach, who presided over one of the most successful periods in South African rugby history between August 1997 and December 1998, when the Bokke won 17 matches in a row, recently recommended the scrapping of the 6/2 bench split in his News 24 column:

“The real issue facing this team presently, I think, is the 6/2 bench split that has landed the Boks in trouble for three straight Tests now. It’s a real problem when you have to make virtually three changes to your backline when one player gets injured.

“If you get a wing going off early, as Jesse Kriel did on Saturday, you suddenly have to make a lot of changes. We saw Damian Willemse go to inside centre, Damian de Allende to outside centre and, even worse, Lukhanyo Am moved to the wing after Kriel left the fray. That is a lot of reshuffling.”

The 6/2 bench has become automatic ever since Rassie Erasmus took over as Springbok coach in 2018, but Nienaber must be agreeing with at least some part of Nick Mallett’s analysis, because he has reverted to a more orthodox split with five forwards and three backs for the first game against Australia in Adelaide next Saturday.

Mallett went on to criticize the rearrangement which moved Lukhanyo Am to the right wing, rather than his partner in the centres, Damian de Allende:

“I don’t care how well Am played on the wing. You’ve got the best number 13 in the world – both on attack and defence – and he is invaluable in terms of closing down options and shutting down space in midfield.

“I think the more sensible play would have been to move De Allende – and not Am – to the wing, where he started his career. That keeps your critical defender in his proper position.”

You can argue the toss on some of Mallett’s statements – Am may well be the best defensive number 13 in the world, but the likes of Semi Radradra, Gael Fickou or Virimi Vakatawa (among others) would have a strong claim to be superior on attack.

The more interesting aspect of the debate is that South Africa may now have stumbled on a way to improve its attacking play in the backline, which has been largely stagnant since the 2019 World Cup win. It is all because of the 6/2 bench split and it is a happy accident – but with the emphasis on ‘happy’.

For all his many virtues, Damian de Allende is not a great passer of the ball from inside centre, but Willemse most definitely would grant the Springboks the instant width they crave on attack

The Boks are now in a position to show a very different ‘look’ on attack while losing nothing on D, and the key when they have ball in hand will be the shift of Damian Willemse to the number 12 spot, where he played a lot of rugby for the Stormers in last season’s URC. Mallett again:

“Willemse was one of the best centres in the United Rugby Championship, and his tackling and reading of the game were standout features. I don’t think the Boks would have lost anything, defensively, if they had paired him with Am in midfield.”

For all his many virtues, Damian de Allende is not a great passer of the ball from inside centre, but Willemse most definitely would grant the Springboks the instant width they crave on attack, and provide an extra kicking option to support Handre Pollard that they have lacked ever since the triumph in Yokohama.

Let’s look at some examples of how Damian Willemse was able to transform South Africa’s attacking play after returning from a yellow card in the 14th minute of the match at Ellis Park. Jesse Kriel was already off the field for good, and the multiple backline shifts Nick Mallett pointed out have just taken place:

It’s only two minutes into the realignment following Kriel’s departure and Willemse’s return, and already the Stormer is seeing a different picture to De Allende off a lineout turnover. Instead of running straight ahead, he is stepping Rieko Ioane to move to the outside and spotting the space in behind Caleb Clarke with a searching kick to the corner. The kick also brings into play one of Am’s major strengths, which is his kick-chase and contest for the tackle ball thereafter.

It has to be added that Lukhanyo Am appears to enjoy the extra space he enjoys out on the wing in attack. There are a couple of invaluable extra seconds afforded to weigh up the situation and gather momentum before he breaks Caleb Clarke’s tackle and stretches for the line.

The option to use the backline attack to full width is a new development off set-piece for South Africa. In this example, it spins off a lineout drive which had ground to a halt; in the second half it derived from a scrum which had already won a penalty:

The presence of Willemse at first receiver gives the Springboks more strings to their bow. Instead of playing for penalty at the set-piece and slowing the game down between stoppages, they can now speed it up with movement to the edge and give the opponent more defensive headaches.

What do the two examples above have in common? Apart from Damian Willemse’s presence at first receiver, Damian de Allende is cut out of the move by the passing on both occasions, and this became a cardinal theme as the game wore on:

No Willemse on this occasion, but there is a direct connection in between Pollard, le Roux and Am out to the right side-line. Damian Willemse’s insertion as an acting number 10 only highlighted the search for immediate width

In both cases, there is a chance to use Damian de Allende’s power through the middle of the field, but it is refused in favour of using the space on the edge instead.

The addition of Willemse as an inside distributor granted the Boks the ability to shift wide-to-wide over consecutive phases:

Damian Willemse’s vision closer to the base of the ruck is again key, this time spotting the space as acting scrumhalf and linking with Pollard and Am down a skinny short side. That still leaves Pollard and Le Roux available to fling two long passes and release Makazole Mapimpi down the opposite edge on the following phase.

The twin priorities are, on the one hand, to keep Damian Willemse on the inside as a regular first receiver and, on the other, to maintain Am’s width as an edge attacker in extra space. In the second half Am was denied after making a searing break from a two-man backfield with Willie le Roux: 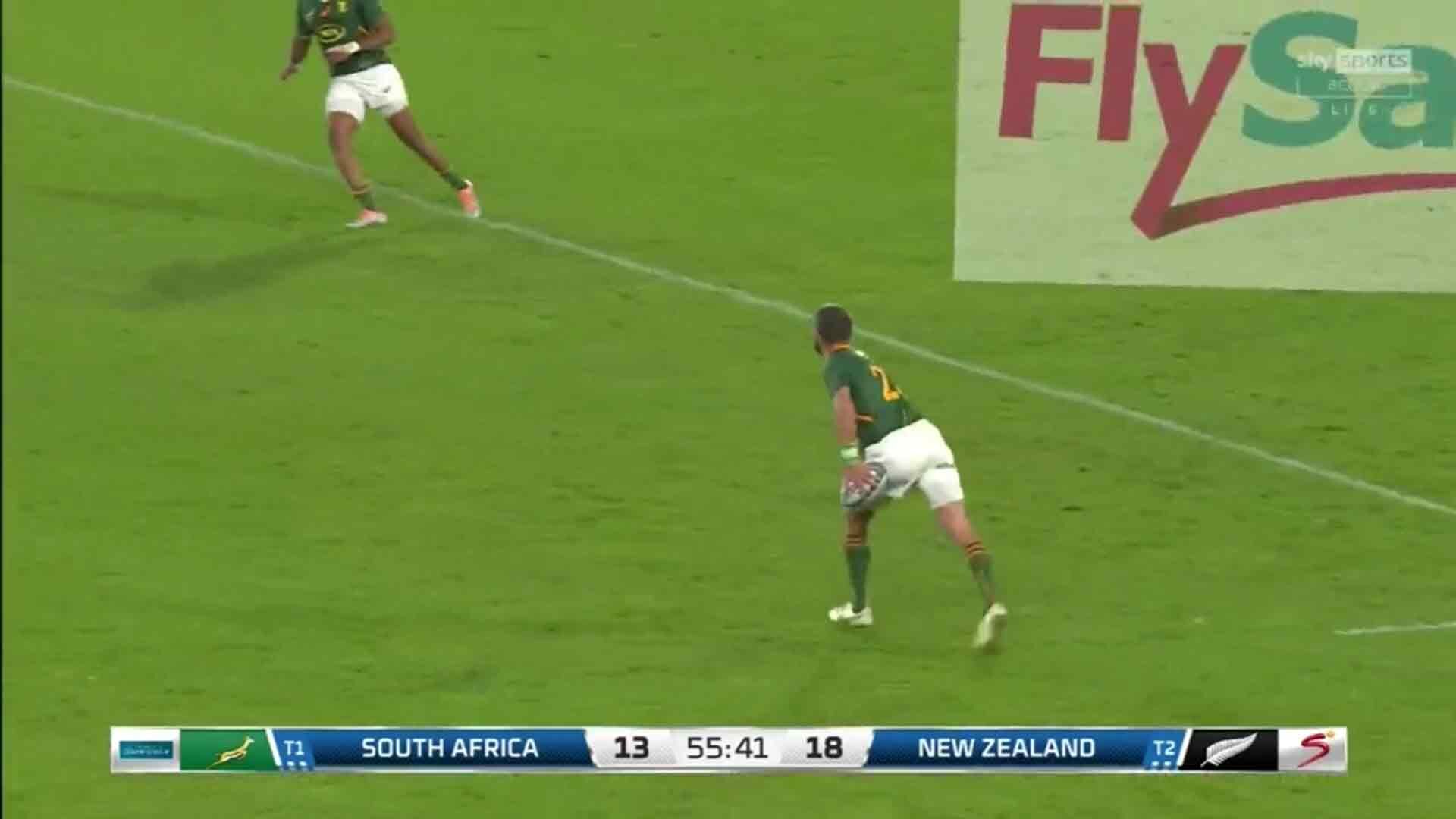 If Am was still deployed at 13 on defence, and in the front line as Nick Mallett suggests, he would not have the chance to receive that pass from Le Roux and maximize his counter-attacking talents from the backfield.

The most interesting development from events at Ellis Park is that South Africa is now in a position to both have its cake and eat it. On attack, they can deploy Damian Willemse and Handre Pollard at number 10 and 12 to offer the threat of extra width ball-in-hand, and a broader spectrum in the kicking game, with Damian de Allende still available as a power-running option outside them. Am can play in the back three in more space along with Mapimpi and either Le Roux, or Cheslin Kolbe (when he returns from injury) at fullback.

On defence, the Springboks can still revert to the formation Nic Mallett recommends, with Pollard-De Allende-Am as the midfield trio, Kolbe and Mapimpi on the wings, and Willemse at fullback. The personnel would remain the same, only the formation would change.

Flexibility is not always a hallmark of South African rugby thinking, but there does appear to be a rare chance for the Springboks to develop their game in attack without losing much, if anything on the other side of the ball. Jacques Nienaber’s willingness to embrace the possibility of change and make the team truly his own may represent his biggest and most significant challenge ahead of the 2023 World Cup in France.