RUGBYPASS+ Analysis: the rise and rise of Dewi Lake

By Will Owen
Analysis: the rise and rise of Dewi Lake
By
Will Owen
4 months ago
WalesOspreysDewi Lake
2:57am, 15 July 2022 Go to comments

Thus far, Wales’ 2022 has been a mixed bag. A gutsy win over an in-form Scotland side and a first-ever win away to the Springboks are offset by a loss to Italy and a battering out in Dublin. There’s no doubting Wayne Pivac’s willingness to develop options ahead of next year’s Rugby World Cup – and it’s always interesting to see which of these players kick on and become undroppable, and who remains, well, an option.

In the Pivac era, some of the most selectable ‘new’ players include Nick Tompkins, Will Rowlands and Kieran Hardy. Most recently, Pivac has unearthed a gem in Ospreys hooker Dewi Lake. It always seemed likely that Lake would win Wales caps – a talented youngster who captained Wales at under-20 level and seemed a born competitor. It wasn’t simple for Lake, though, as he had to move from No 8 to hooker aged 17.

In the modern game, these two positions aren’t too dissimilar around the park, especially for a 17-year-old. The set-piece, though, is extremely specialised, and while Lake’s throwing still is still being refined, he’s done an excellent job to get it up to international standard. Toby Booth has shifted hell and earth to unleash Lake’s true potential at the Ospreys, and it’s great to see him putting his best foot forward in a red jersey.

Wales’ tour to South Africa isn’t designed to be enjoyed, per se, but if one player is enjoying the task given to him, it’s Lake. Going toe-to-toe with Malcolm Marx on a weekly basis is a mammoth role and a huge opportunity. Marx is the most formidable No 16 in the world, and that’s a very realistic target for Lake to aim for. Who better to learn from than the Bomb Squad’s figurehead?

Over the course of these tests, let’s have a look at some of the ways in which Lake is benefitting Wales from the bench. First up, we’ll have a look at a fantastic piece of defence from the second test.

The Springboks, famous for their deadly driving maul, have just began moving against the Welsh pack. They have splintered off to the left, where Lake is just out of shot.

As they shake off the Welsh pack, Lake enters the shot on the far left. He has been saved back to enter the maul in case South Africa begin making some headway, but Lake decides to use more than sheer brute force to stop this maul. Having not heard the call of “same maul” from referee Angus Gardener, Lake knows he is entitled to tackle the ball carrier.

Instead of taking out Marx at the back of the pack, Lake approaches the South African pod as though he is going to contest. If this were still technically a maul, Lake would be entering from the side, essentially landing a cheap shot on Rynhardt Elstadt in #20. Naturally, Elstadt braces for impact and to prevent Lake from halting what he still believes is a maul. Seems logical, right?

Gardner, however, sees exactly what Lake has gone for. Lake has intentionally gone for the player placed directly between him and Marx, and Elstadt has made an active effort to repel Lake in open play. Gardner awards Wales a penalty for obstruction. Fantastic knowledge of the maul laws by Wales’ young hooker.

Now we’ve looked at a brilliant piece of defence, let’s have a look at him in attack. Here’s an overview of his try from the first test.

Lake (circled) is surrounded by fellow Welsh forwards as Wales have succeeded in their initial shunt.He remains bound to Tommy Reffell in front of him, meaning he can legally use him as a shield. Josh Navidi is about to enter from his right to protect the ball.

As Navidi and Rowlands drive the maul forwards, Lake shifts to the left-hand side of the pack. Tomos Williams asks for the ball, but Lake is keen to continue driving, and breaks off alongside Alun-Wyn Jones. 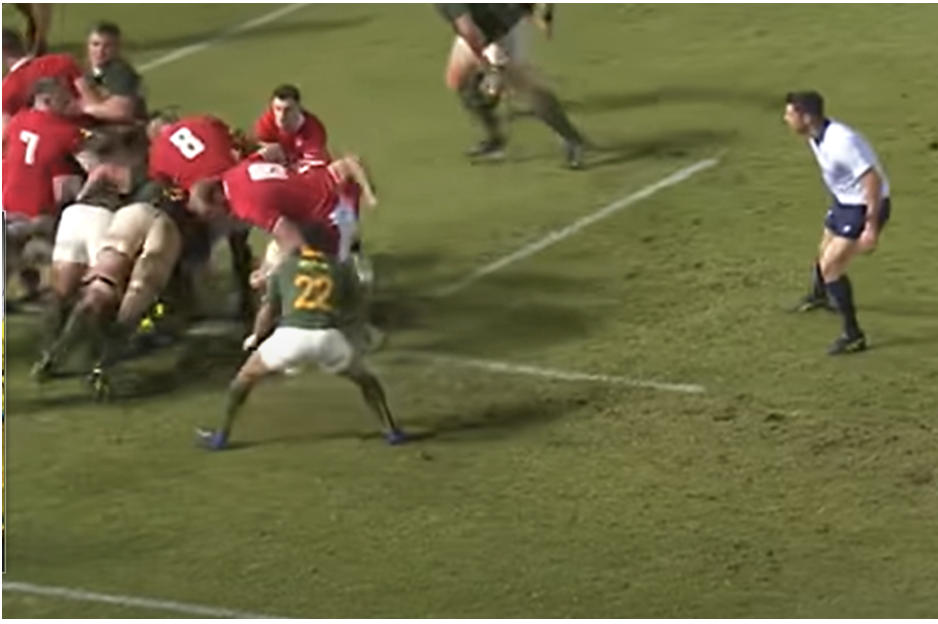 The important detail for Lake here is to remain hidden. From this back angle, it’s difficult to spot Lake, who is hidden behind Jones wearing 19. Jones runs at Herschel Jantjies’ inside shoulder. One mustn’t envy Jantjies here, defending a maul against two heavyweight tight-five forwards, but it’s much more than that. Knowing that he is shielded from Jantjies’ view, Lake runs to the scrum-half’s outside shoulder – this is essentially a sidestep, as he shifts Jantjies’ bodyweight from one side to the other.

Not spotting Lake until the last moment, Jantjies can only get a passive tackle on him. This allows Lake enough momentum to crash over the line. A very smart finish, especially when his team is down to 13 men.

Lastly, let’s look at something small which says a lot about his approach to his role with Wales.

Circled in midfield, Lake is stood next to Nick Tompkins. As Louis-Rees Zammit cuts infield with the ball, one of two things is about to happen: Rees-Zammit is about to make a break, or he is about to get hit hard by a beefy Bok bruiser.

Just behind the touch judge in the foreground, Lake decides to give Zammit some support just in case the latter option is afoot and his team are about to go backwards. He runs a hard unders line with intent.

After Rees-Zammit has ran a good five metres, he has the imposing figure of Eben Etzebeth in front of him. In this situation, any winger would be grateful for a hooker bailing them out with a hard line. Not only that, but with Malcolm Marx looming, South Africa have one of their biggest breakdown threats present, alongside Etzebeth, one of the best in the world at counterrucking. If South Africa manage to smash Rees-Zammit backwards, they have a strong opportunity to win the ball.

Lake receives the ball and gets Wales moving forward, already minimizing the turnover threat. Marx remains present, but Reffell doesn’t have to backpedal to clear him out. Merely by anticipating the angle of Rees-Zammit’s run, Lake has won Wales some small yet potentially crucial yardage.

Lake is an unflashy hooker, but a promising young player for all Welsh fans to get excited about. In just two weeks, he has earned the respect of many South African fans, and most certainly won the admiration of Malcolm Marx. Whether Wales have Ken Owens. Elliot Dee or Ryan Elias available to start for them by the Rugby World Cup, Dewi Lake has to be the man wearing the #16 jersey. Few hookers have the potential to add as much to a game late on as this Osprey.