RUGBYPASS+ All Blacks implosion: What really happened at Twickenham

Watch the first 71 minutes of last weekend’s climactic clash between New Zealand and England at Twickenham, and stop the tape there. They would have convinced even the most sceptical of Kiwi supporters that their beloved All Blacks were back on track after a rollercoaster 2022 season.

New Zealand dominated the collisions, with a higher ratio of steals at ruck time (three, to one by England) and a better retention rate (two per cent higher). They had, on occasion, run England back at a brisk trot in their areas of historical preserve, the maul and the scrum.

They had scored three tries to nil and were 25-6 up on the scoreboard. For heaven’s sake, they had even taken a leaf out of the Jonny Wilkinson playbook and dropped a goal to push themselves out to a 19-point lead. What could possibly go wrong? Both the quality of the performance and the ultimate outcome looked cut and dried.

It was the sort of winning margin the team of 2011 or 2015 would have put to bed without having to count any sheep at all – the ‘W’ would have been automatic. But the final nine minutes of the match will have exhumed and laid bare all the anxieties of the 2022 Kiwi rugby supporter as surely as the first 71 covered them over with the gentle earth of the old ‘cabbage patch’.

If anything, traditional roles were comprehensively reversed, with New Zealand controlling the set-piece and the contact zone but England successfully living off the scraps that fell from the Kiwi table in the final ten to score three rapid-fire tries and level the scores before the final whistle.

As head coach Ian Foster commented after the game, “We will probably have two press conferences, one for the first 70 minutes and another for the next 10.

“It was a game of drama and to come away with a 25-all draw is something we are pretty disappointed with. That first 70, to me we really played the sort of rugby we want to get to.

“We had a great tour and we were pretty determined to come to this game against an England team that was very physical against us three years ago, [when] we struggled to control the game against them. I thought tonight we did that really well, and put ourselves into a position where we should have been a little bit better, but credit to England for the way they came back.

“That card [on Beauden Barrett] sort of galvanised them, and their performance in the last ten is worthy of a lot of credit. 25-all to finish the year, whilst it is frustrating there were large parts of that performance I was particularly proud of, and it shows a lot of the progress we made in the second half of the year.”

The main worry is that when New Zealand begins to lose control of the breakdown defensively, their defence can be exposed.

They were all fair comments. But the All Blacks’ head honcho zeroed in on the more essential truths when he added, “We went down one [player], and we will probably have to pull it apart and have a look, but clearly they started to bend us. Once we went down to 14, they went wide-wide and we weren’t able to stop them.

“It’s probably the type of ball that they were trying to get from the start of the game and couldn’t quite get it, but they certainly got it at the end. It is a good growth point for us.”

In the second half of the season, the Joe Schmidt-inspired attack has successfully implemented a ball-control policy where the All Blacks can win most of the penalties awarded at scrum (three out of four at Twickenham) and lineout drive (three out of three), then sit on the field positions they obtain until the pips of the opposition start to squeak.

The main worry is that when New Zealand begins to lose control of the breakdown defensively – zero penalties conceded in the first half as against three in the third quarter, then four plus a yellow card in the final 20 minutes – their defence can be exposed. It is the one part of their game which has not ‘kept up with the Joneses’ and improved at the same rate as the other aspects, since the introduction of Schmidt and forwards coach Jase Ryan mid-term.

Let’s take an in-depth look at why the New Zealand D failed so miserably down the stretch in West London. We can pick up the story with England’s first try which led to Beauden Barrett’s eventual dismissal on a yellow card: 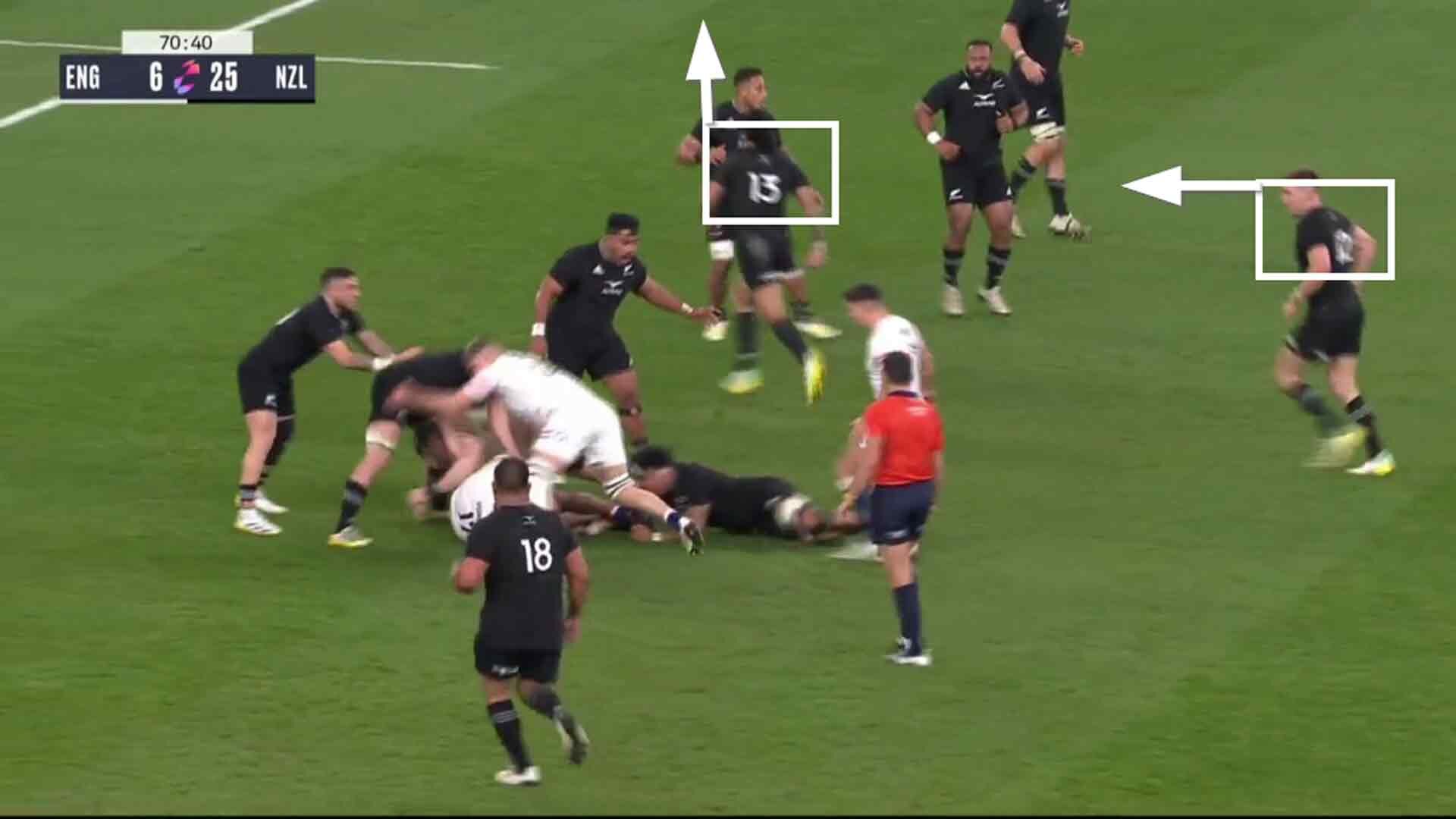 England win back a short kick-off dropping just over the 40m line in midfield, and both the New Zealand centres (Jordie Barrett and Reiko Ioane) retire to the same side of the defence without taking stock of England’s attacking options on the next phase. They have their backs to the next play, and we have seen this lack of communication and sense of disconnect before.

This is how the next phase unfolds as the shot widens: 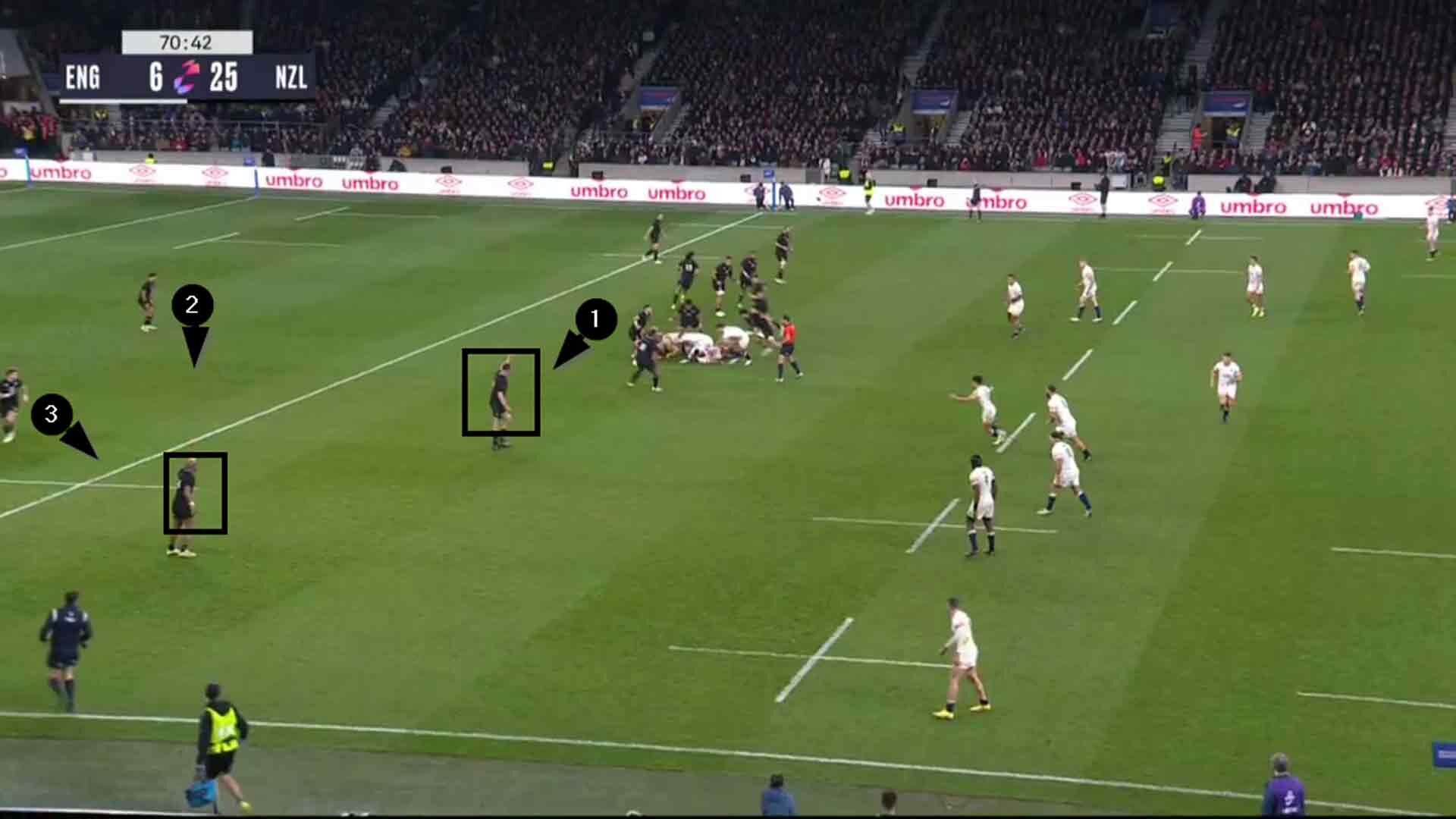 With both of the Kiwi centres dropping to the same side, two tight forwards (Brodie Retallick and Nepo Laulala) have been left high and dry, defending in 25 metres of space against six England attackers including backs Marcus Smith, Owen Farrell and wing Johnny May. Unsurprisingly, the new English ‘wunderkind’ Smith is able to run straight past Retallick and set up a scoring ruck right on the New Zealand goal line.

Remember that picture, it will become important as the next seven or eight minutes unfold. New Zealand like to keep two defenders in the backfield (here, Beauden Barrett and Richie Mo’unga) with the halfback (TJ Perenara) sweeping in behind the ruck, in the so-called ‘boot space’.

With Barrett rightly off the field on a yellow card for failing to release Smith at the tackle, the All Blacks kept the same defensive formation despite dropping to 14 men:

There are still working with 11 defenders up front, with two in the backfield and Perenara in the boot. It is here that New Zealand’s tactical naivety begins to show, because ever since the 54th minute, when Eddie Jones replaced a power centre (Manu Tuilagi) with an extra first receiver (Henry Slade), England had all of the passing ability they needed to shift the ball wide. Slade, Farrell and Smith all have extensive experience at the number 10 spot for their clubs, and they are the first three receivers (in that order) in this sequence.

It gives England a 20-metre gain they do not really have to work for. The same happened on the following phase too: 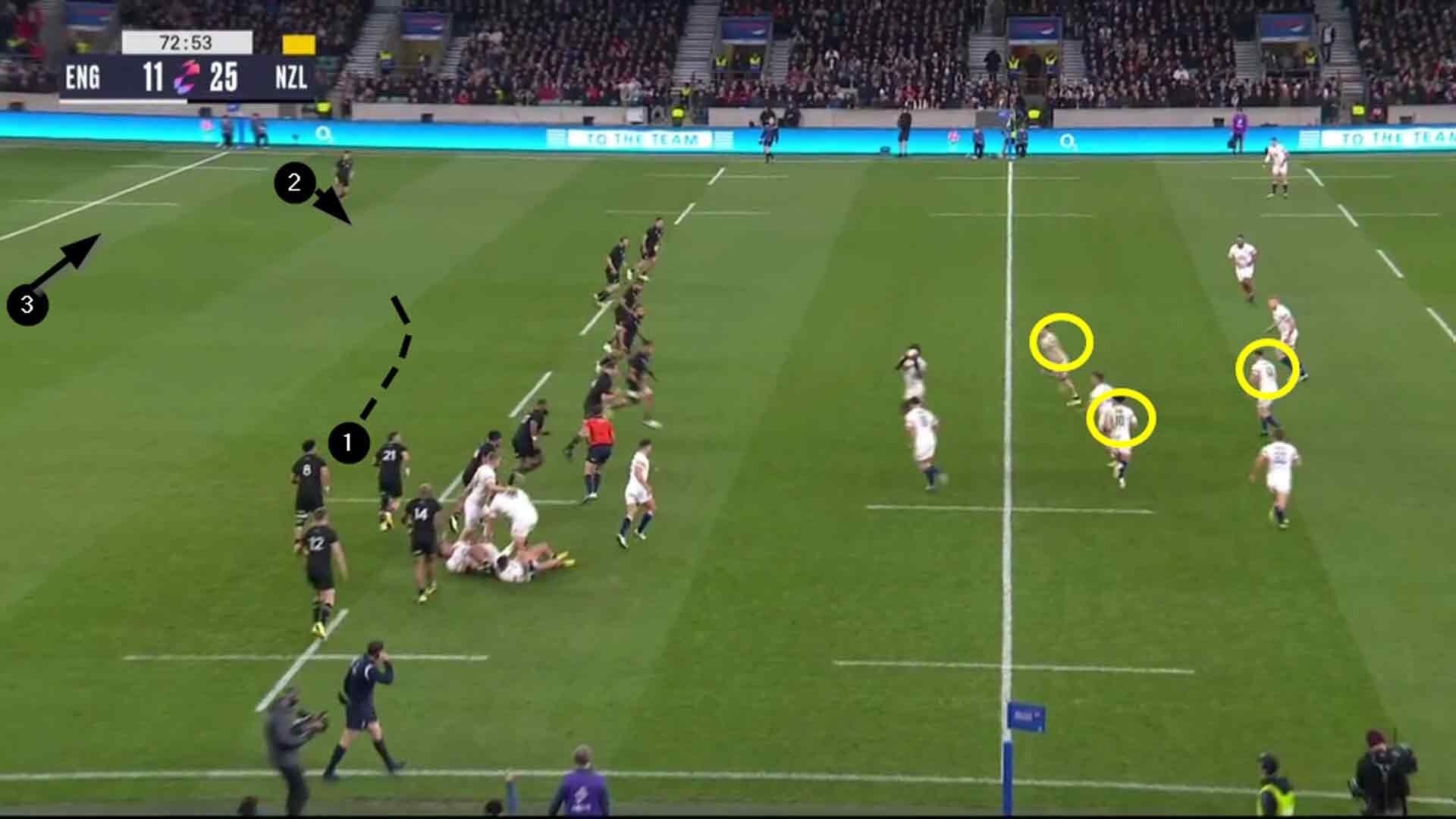 While England have recycled all their three potential first receivers for the next phase, Rieko Ioane is still standing in the backfield and misses the tackle on Freddie Steward when the ball goes wide, and Perenara is ruck-hopping and never reaches the play. It is left to Richie Mo’unga to make a tackle deep in his own 22, but at that stage, the New Zealand defence has already given up another 30 metres without forcing England to take any major risks in their choice of play. England completed the sequence successfully two phases later, with Steward probing the same (short) side of the field:

The view from behind the posts reveals just how passive and reactive the Kiwi D had become on one of the key ground-gaining phases:

While England are stringing their trio of passers together and eating up the yards, Perenara and Richie Mo’unga are just running from one side of the field to the other. The scrumhalf could have been far more profitably deployed up front in the line as an extra tackler.

It is worrying for the All Blacks that there was no hint of a tactical adjustment on the following passage of play after kick-off:

It is exactly the same picture as before as the ball is moved towards the England right. Rieko is still playing ‘off’ and unable to make a positive contribution when the ball comes to his side, Perenara is still not a factor running from the ‘boot’, and Richie again has to complete the tackle from a backfield position on the opposite side of the field. Will Stuart scored his second try, and England pulled level on the scoreboard three phases later.

Would Richie McCaw, Conrad Smith and Ma’a Nonu have allowed that to happen on their watch? Doubtful. The problems would have been diagnosed and solved after the very first sample of England’s new plan of attack. Any defence can be surprised by a new ploy, but a second or third repetition raises questions about the quality of the response.

While several aspects of Kiwi play have improved markedly with the introduction of Joe Schmidt and Jason Ryan to the coaching group, defence, leadership and ‘live’ tactical awareness are ongoing issues. For New Zealand supporters, their remains the itch that cannot be scratched, and the nagging doubt at the back of the mind ahead of the World cup in France.