Where are they now? The last England team of the amateur era 25 years after their 1995 World Cup exit

Where are they now? The last England team of the amateur era 25 years after their 1995 World Cup exit

This wasn’t how Jack Rowell’s England were meant to bow out of the old amateur era, losing 19-9 to France in a World Cup third-place off in Pretoria four days after getting steamrolled by Jonah Lomu and the All Blacks in the semi-finals. The plan for the England Class of 1995 was to reach the World Cup final, spoil the South African party and make full amends for what happened four years earlier when they were beaten by Australia in the 1991 final at Twickenham.

Swatted aside by the All Blacks in Cape Town, a damaging 3-25 interval deficit getting marginally reduced to a 16-point losing margin (29-45) thanks to a late rally with the result long since decided, Rowell made just two changes for the June 22 playoff 25 years ago, Ian Hunter replacing Tony Underwood on the wing and Steve Ojomoh coming in for Dean Richards at No8.

A low frills first-half ended in a stalemate, the teams deadlocked at three points all, but France, who had an extra day to recover from their semi-final loss to the Springboks, were the better side after the break and tries from Emile Ntamack and Olivier Roumat put England out of their misery.

By the time they got to play again five months later, the sport had turned professional and familiar names such as Brian Moore were no longer on the team sheet. Here, RugbyPass takes a step back in time to discover what became of the last England team of the old amateur era.

The Port Elizabeth native’s international career culminated in 75 England caps, two World Cup final starts and that precious 2003 win in Australia. If being a semi-final doormat for the unstoppable Lomu was the sacrifice necessary 25 years ago for that RWC subsequent glory to unfold eight years later, Catt played his rag doll part to a tee.

Now 48, the 1997 Lions Test cap enjoyed a lengthy pro club career at Bath, winning the 1998 European final before switching to London Irish where the coaching career that now has him working with Andy Farrell’s Ireland commenced. Spent the last two World Cup cycles working as an assistant for England and Italy respectively.

The winger came into the side in place of Underwood and it turned out to be the last England appearance in his seven-cap career. A 1993 Lion who had his tour ended with a shoulder dislocation in the first match at Northland, he played for Northampton in the professional era until January 2000. A long-time managing director at Jellyfish Creative, a design and marketing agency, the now 51-year-old is currently a Krow Group business director.

As for Underwood, his express train try from a run that began inside the England half was critical to the ’95 quarter-final success over Australia.

That score, though, became forgotten amid the fanfare surrounding the Lomu demolition, Underwood later appearing alongside his brother Rory in a humorous Pizza Hut advert with the New Zealander remembering the semi-final.

He played just eight more times for England after that RWC, the end coming in his 27-cap career at home to South Africa in 1998. A Lions Test player in 1997, he switched to Newcastle from Leicester when the club game went pro, winning the league title.

Spent the first year of retirement as a marketing assistant at the club before embarking on an aviation career, first with easyJet and then Virgin. Now aged 51, he is based in the UAE with Emirates.

Underwood in space was always dangerous! Remember his incredible try against Australia at #RWC95? #TBT pic.twitter.com/cdCiSTCEoT

He wasn’t meant to be skipper at the finals as he had lost the responsibility after infamously labelling the RFU powerbroker “57 old farts”. That decision was overturned following a public backlash, the Harlequins stalwart going on to retain the captaincy through to the 1996 Five Nations and he earned the last of his 72 England caps the following year.

Now 54, the midfielder, who earned one Test cap with the 1993 Lions, set up his own company, Will Carling Management, in 1999 which, according to Linkedin, “delivers bespoke events for clients in relaxed, fun environment”. Also founder of The Pack, an elite cycling club for the corporate world. He has managed to maintain his high profile, a popularity reflected in his 174K Twitter followers.

A Rolls-Royce of a player, his 65-cap England career carried on for another while, the centre making it through to the 1999 World Cup. He also clinched the 1997 Lions Test series win with a drop goal in Durban versus the Springboks on what was his third tour.

Played professionally at club level with the European Cup-winning Bath and is still involved in rugby as a respected media pundit. Now 54, he is business development director at Vizion, a specialist retail insurance broker.

The lightning-quick winger dusted himself down after being Lomu-ed to win another six caps after the World Cup before drawing a final line under an 85-cap England career that also featured seven Lions Test appearances. A Leicester player, Underwood switched to Bedford and continued to fly as a Royal Airforce pilot after the game turned pro, completing an 18-year service in 2001.

Has since had various company directorships and has owned Wingman Ltd since 2009, the performance consultancy and team development business. Remains involved at Leicester as a non-executive director, the now 56-year-old even making a cameo appearance in last year’s RugbyPass documentary series on the Tigers academy. 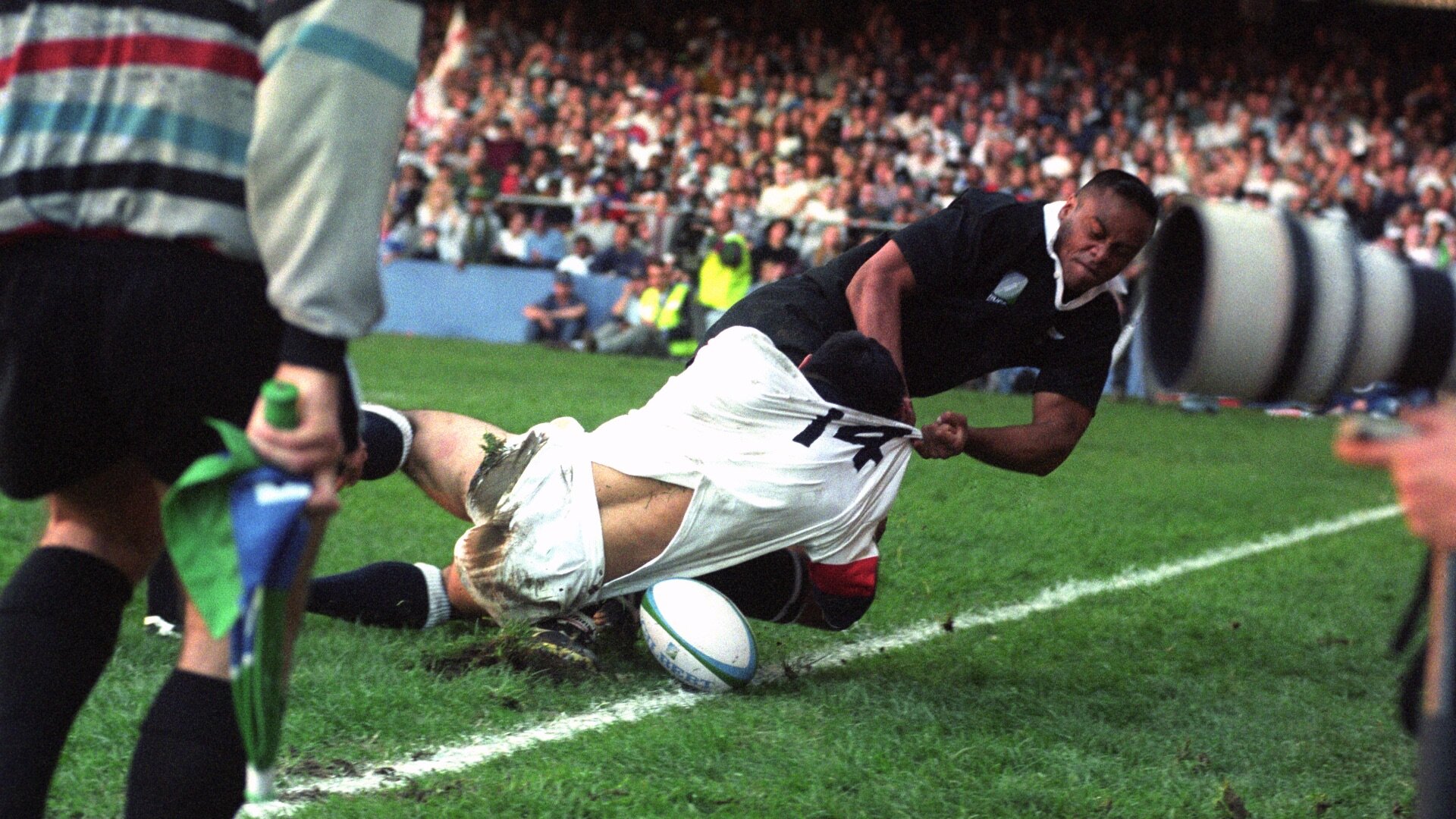 Put the boot into the Aussies in the quarter-finals, but that was as good as it got at RWC95 for the then veteran. The third-place playoff versus France was the last start in a 71-cap England career where his only appearance after was off the bench versus Wales in 1997.

A standout at Wasps in the amateur era, he guided Newcastle to league glory in the professional era and became the club’s director of rugby, helping Jonny Wilkinson towards greatness before joining the RFU in 2006 as director of elite rugby.

Stayed in that role through to January 2011 and while he came under fire following the unsavoury World Cup fall-out later that year, he remained with the RFU as director of pro rugby until 2016. Now 57, he currently works as Sussex Cricket CEO.

His 26-cap England career ended with the playoff versus France and he would have had so many more but for the old replacements rules where changes were only made for injuries – he sat on the bench on 27 occasions. The 1993 Lion took a break after the finals before remerging in the professional era at Sale. Now 56, he continues to work in rugby as a Sky Sports pundit.

‘The Fun Bus’ still had plenty of life left in his career after RWC95, going on to feature on two more Lions tours and in two more World Cups, including an appearance off the bench in the 2003 final win over Australia. The last cap of his then world-record-setting 114-cap England career came the following year in Rome.

Having called time on his Harlequins club professional career that same year, the now 51-year-old retains strong ties with the game, serving a year as RFU president in 2015/16, joining the Lions board in 2017 and doing likewise at the Six Nations the following year.

A senior advisor at the Besso insurance group, he is also chairman of the Atlas Foundation which uses rugby to provide humanitarian benefit for the most deprived children around the world. 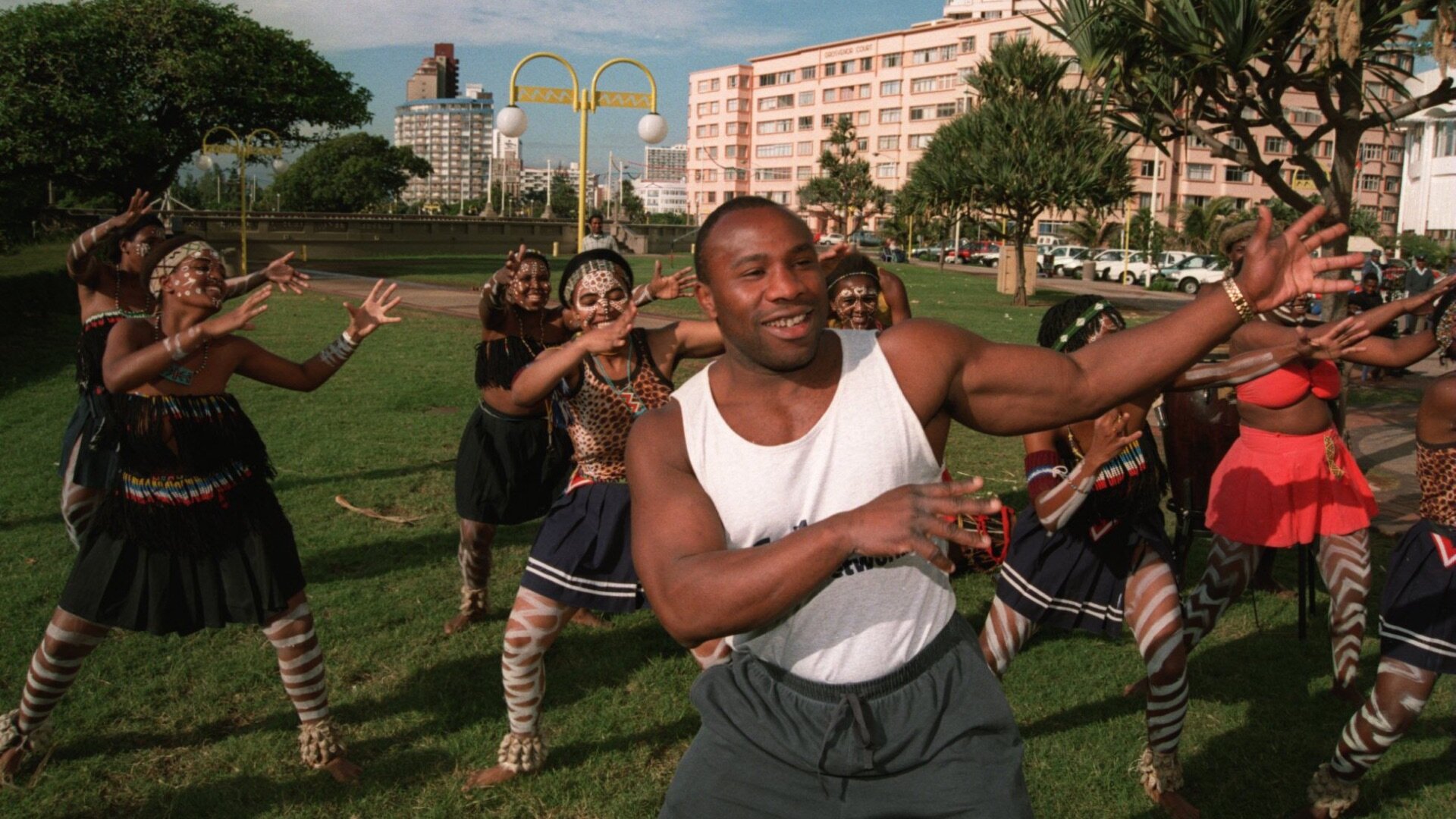 World Cup ’95 was the end for the hooker’s respected international career which featured 64 England caps, the last coming in the French playoff, and five Lions Test caps. A qualified solicitor, the now 58-year-old ‘Pitbull’ has developed a punchy media career and gained rave reviews for his award-winning book, Beware of the Dog, which detailed his sexual abuse as a child. His popularity is reflected in having 233K Twitter followers.

The now 55-year-old prop had a 24-cap Test career which ended in Sydney in 1999. Played professionally with Bath until 2000 and has since developed a successful sports hospitality and travel specialist company, VU Ltd.

Was still only a relative newcomer on the Test circuit in 1995 in the sense that 66 of his 84 England caps were to come after this RWC. The 1997 Test series-winning Lions skipper rubber-stamped his legendary status when captaining England to 2003 World Cup glory but a career on the other side of the white line wasn’t as kind to the Leicester icon, Johnson’s tenure as national team boss ending sourly with 2011 World Cup quarter-final exit. Now 50, he does rugby punditry and has developed a keen interest in cycling. 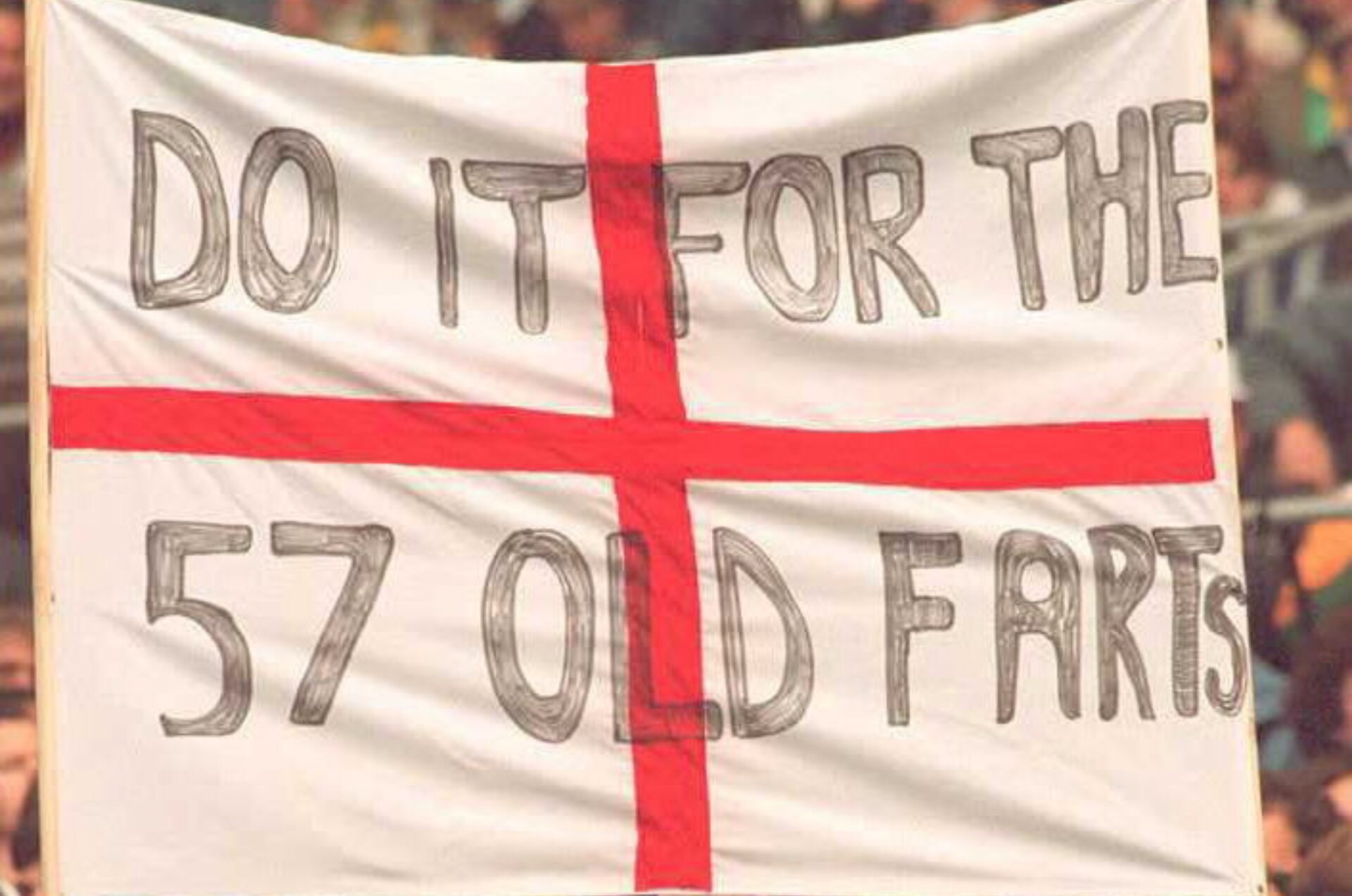 Just four more caps followed in the lock’s 31-cap England career. Played professional club rugby at Northampton through to 1998 and had a stint as academy director before combining an acting career – he played the body double of Hagrid the Giant in all the Harry Potter films – with media work that included presenting the BBC’s Crimewatch. Now 53, he is part of the BT Sport rugby presenting team.

There was another World Cup in the flanker, the 1999 tournament bringing the curtain down on a 44-cap England career that also featured caps with the 1997 Lions back in South Africa. Injury ended his Northampton club rugby career in 2001 and the former British Army captain has since had various managing director roles. Having turned 51 on June 2, he is now CEO of The Instant Group which delivers innovative workspace environments in over 110 countries.

There were still plenty of outings left in the now 52-year-old’s 40-cap England Test career after the RWC before his last was earned in Sydney in 1999. The back row endured the precarious of professional club rugby, becoming one of the biggest casualties when Richmond went into liquidation. Saw out his playing days back at Bath before becoming a money broker.

The back row ultimately only ever won twelve caps, his last coming in Dunedin against the All Blacks in 1998’s so-called tour of hell. A serial trophy winner at Bath, he went on to play for Gloucester, Parma and Newport before moving into coaching in 2003.

Opened the Little Willows nursery in Bath in 2010. Recovered from a stroke in October 2018 and the now 50-year-old’s connections with rugby are still strong as son Max is an England age-grade international who is now on professional terms at Bath.

As for Richards, whom Ojomoh replaced in the England XV for the 1995 third-place playoff, you don’t have to look far to find the former No8 as he has been volunteering for his local police force in Newcastle during the coronavirus pandemic.

Now 56, the long-time Falcons director of rugby finished playing at Test level in 1996 with 48 England caps and the 1993 Lions tourist played professionally at Leicester before succeeding Bob Dwyer as the coach. Sacked in 2004, he got back on the horse at Grenoble before a promising stint at Harlequins was ruined by the Bloodgate scandal which led to his resignation and a ban from the sport.

'It did turn sour'

Ed Griffiths' behind the scenes insight into the Springboks 1995 #RWC win ??, the back story to the Mandela moment, confronting flag-waving fans, holding clothes hangers for luck & the lost opportunity of it all