END_OF_DOCUMENT_TOKEN_TO_BE_REPLACED

Lol....Stephan Lewies, Irne Herbst, Wilco Louw, Tyrone Green, Andre Esterhuizen.... I think he lost the right to moan that it's supposed to be European when his club started buying all the South African players.

END_OF_DOCUMENT_TOKEN_TO_BE_REPLACED
'If you were carrying the ball, you always felt he was hunting you down, that he was coming'
J
John 7 hours ago

Robert Baloucoune, Mack Hansen and Cian Healy were also on the scoresheet at the Aviva Stadium to help rugby’s top-ranked nation back up victory over world champions South Africa.

Andy Farrell’s much-changed side were well below their free-flowing best and forced to come from behind following Kalaveti Ravouvou’s fine opener, before conceding an outstanding consolation score to Simione Kuruvoli.

Fiji played most of a stop-start second half a man down after Gloucester flanker Albert Tuisue was dismissed for ploughing into the head of Joey Carbery, while Manasa Saulo and Api Ratuniyarawa each spent spells in the sin bin.

Despite a fragmented display featuring opportunities for a handful of fringe players, the stuttering Irish were never in serious danger of slipping to a first defeat to the Pacific islanders as they warmed up for next weekend’s showdown with Australia in victorious fashion. 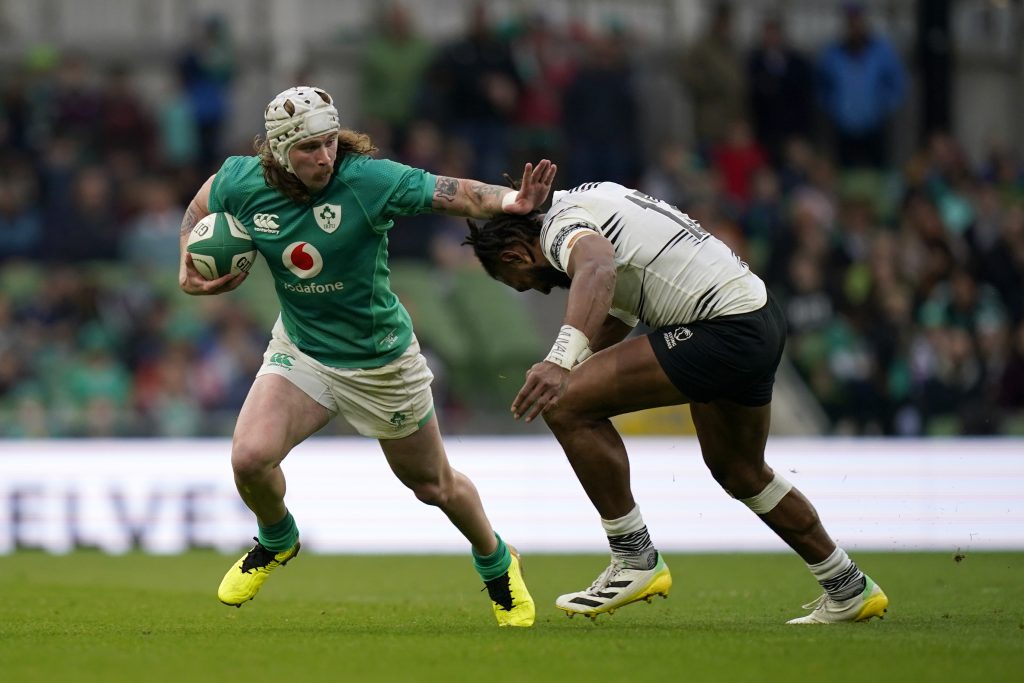 Yet, in addition to the premature departure of Carbery, an early injury sustained by Robbie Henshaw was further concern for the home team following their 16th victory from 18 Tests.

Head coach Farrell made nine alterations to the starting XV which toppled South Africa amid a mini injury crisis, with Tadhg Furlong becoming the 109th man to captain Ireland.

Ahead of kick-off the crowd paid tribute to former Ireland international Paul McNaughton, who died on Sunday aged 69.

The subdued atmosphere continued into the game and those spectators who were contributing noise were quickly stunned into silence by Fiji’s rapid start.

Teti Tela was wayward with an early penalty but, having regained possession, the free-running Fijians ripped through the Irish defence, culminating in centre Ravouvou racing clear to dive over following slick interplay between captain Waisea Nayacalevu, Seta Tuicuvu and Vinaya Habosi. 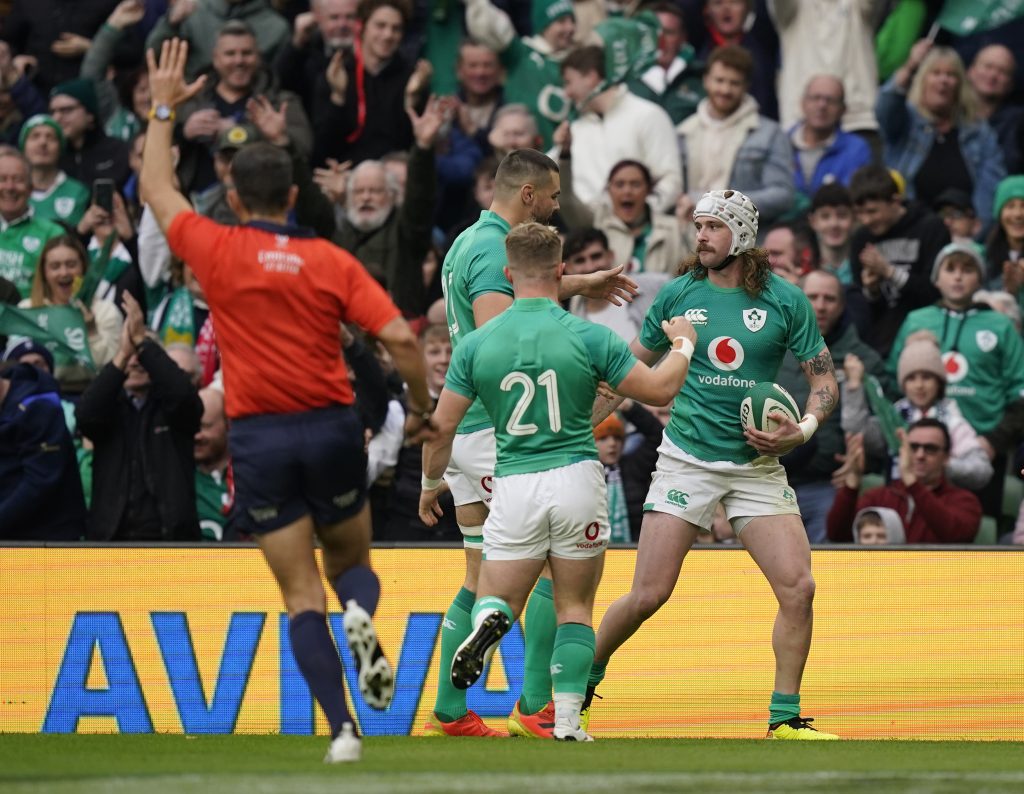 There was ripple of appreciative applause among the home fans and Ireland’s sloppy beginning was compounded by Henshaw limping off in the aftermath of Tela’s successful conversion.

With the Irish having downed the Springboks and poised to take on the Wallabies, rival coach Vern Cotter claimed the hosts may have their minds on other matters and would use this match as a “training session”.

Farrell’s men eventually began to dispel that theory as flanker Timoney burrowed over twice in quick succession, either side of Kieran Treadwell seeing a score ruled out on review due to a failure to ground. 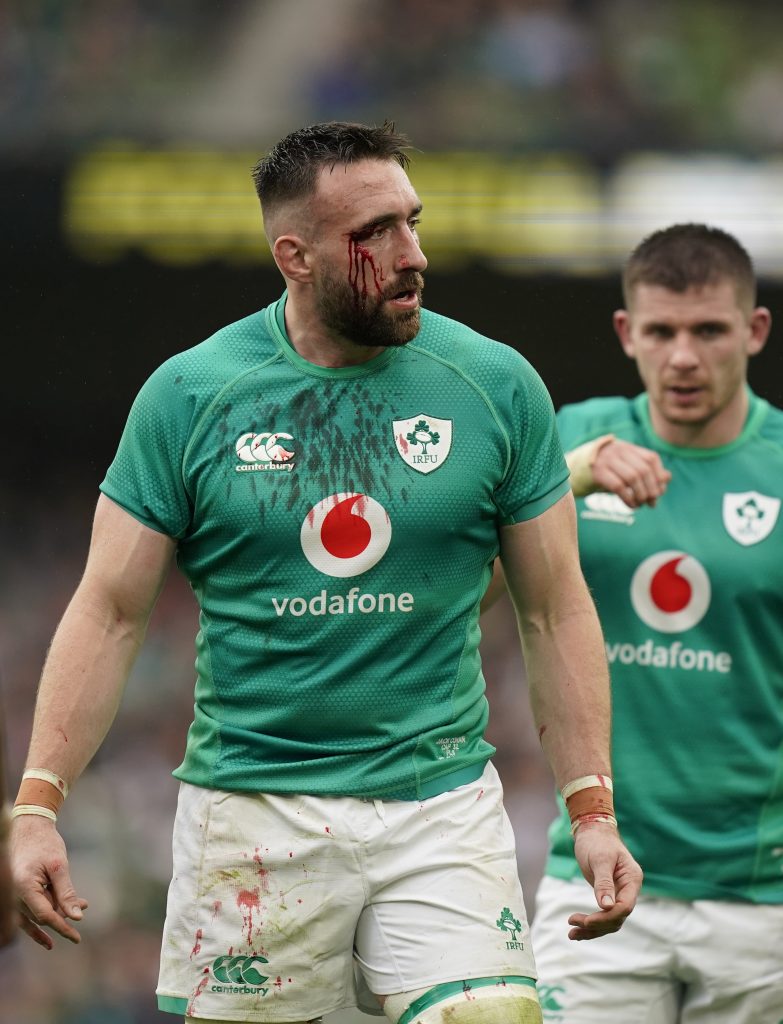 Fiji, who had prop Saulo sin-binned following an accumulation of infringements, briefly reduced the arrears through a Teti penalty, before Jimmy O’Brien’s superb line break followed by a fine Jamison Gibson-Park pass gave Baloucoune a simple finish on the right.

Carbery, given another opportunity to deputise for influential captain Johnny Sexton, nailed the difficult conversion, to maintain his flawless record and tighten the home side’s grip on the scoreboard going into the break.

The unfortunate Munster man’s opportunity to impress was cut short as he left the field in the 46th minute following Tuisue’s crude shoulder-led challenge, resulting in a Test debut for provincial team-mate Jack Crowley.

Fiji were then briefly down to 13 players as London Irish lock Ratuniyarawa was yellow carded.

Ireland eventually capitalised on their numerical advantage when Hansen crossed for a deserved try, with 22-year-old Crowley adding the first of his two conversions.

But veteran prop Healy ensured Ireland had the last say, bulldozing over to cap an 11th consecutive win on home soil, a record Farrell’s men will hope to improve when they round off their November appointments against Australia in seven days.