Exeter launched their defence of the Heineken Champions Cup by crushing Glasgow 42-0 at Sandy Park. Roared on by a 2,000 crowd – the first spectators allowed into Sandy Park since March – Exeter delivered a comprehensive win that put them firmly among the early Pool B pace-setters.

Glasgow showed plenty of grit, but they offered little in attack as Exeter’s forwards dominated and Chiefs had a bonus point secured midway through the third quarter.

Life for the European champions will soon get infinitely tougher, with four-time tournament winners Toulouse waiting for them in France next Sunday.

Toulouse opened their campaign in impressive fashion away to Ulster, and the encounter against Exeter already looks a pivotal game regarding the race for quarter-final places.

But Exeter will travel in confident mood, having knocked out Toulouse at last season’s semi-final stage and winning all four of their domestic and European games this term with bonus points.

Both sides welcomed back a number of international players, with Exeter including ex-Glasgow players Hogg and Gray, as the Chiefs began a new Champions Cup campaign just 57 days after they lifted the trophy by beating Racing 92 in Bristol.

It was a hesitant opening by the Chiefs, though, with Simmonds putting the kick-off straight into touch, before Glasgow gained a long-range penalty from the resulting scrum that Peter Horne sent narrowly wide.

But Exeter were soon into their renowned rhythm, and they delivered a trademark try after 14 minutes.

They went close with a driven lineout, and when Chiefs repeated the tactic from their next attack, Sam Simmonds made no mistake, touching down for a score that his brother Joe converted.

The Exeter forwards began to find overdrive, and there was little Glasgow could do stem a relentless flow of phase-play deep inside their own 22.

Gray crashed over for a second try in the 24th minute, again converted by Simmonds, and referee Mathieu Raynal lost patience with Glasgow’s repeated infringing, showing a yellow card to centre Sam Johnson.

Glasgow did not concede a point while Johnson was off, and while Exeter did not score again before half-time, the visitors saw two more departures when Horne and hooker George Turner departed for head injury assessments. 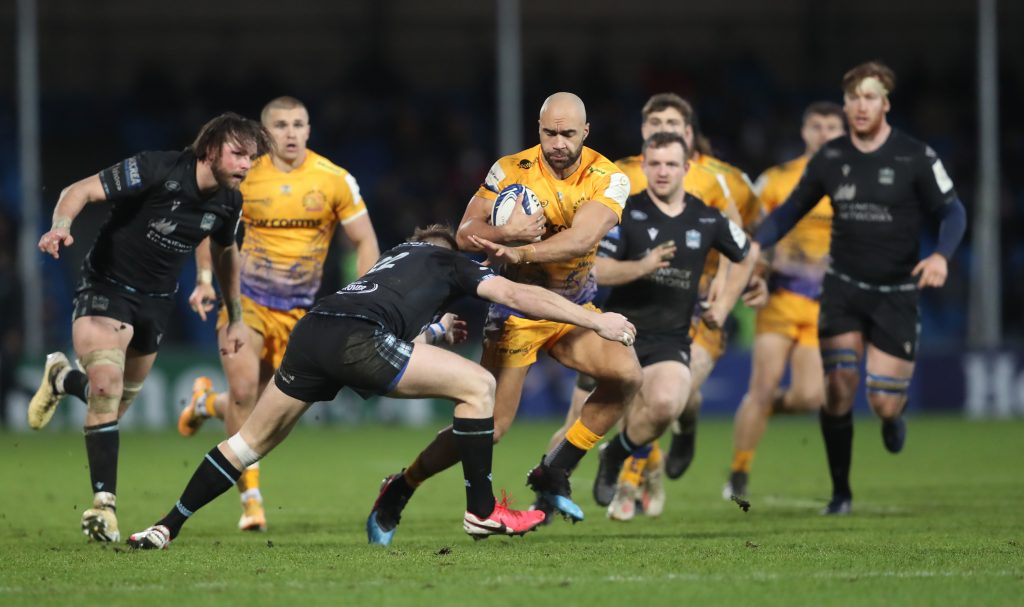 It was a solid, rather than spectacular, first 40 minutes by the Chiefs, but with no doubting their supremacy up-front.

Right on cue, the Exeter backs took centre stage just two minutes after the start when Woodburn made a searing midfield break and sent Hogg across for a superb try that Simmonds converted.

There was no way back for Glasgow, and Exeter collected a bonus point in the 54th minute when Glasgow’s lineout malfunctioned and Yeandle scored a simple try, converted by Simmonds.

Exeter had not finished yet, and Woodburn showed the Glasgow defence a clean pair of heels to add try number five, which the immaculate Simmonds converted.

And with one eye on the meeting Toulouse in seven days’ time, Exeter boss Rob Baxter made a host of changes, taking off the likes of Hogg and flanker Dave Ewers and being able to reflect on a convincing afternoon’s work.