Why Pollard isn't world's best Next
Back
Internationals

As a boy, Richard Kahui always aspired to be an All Black – that was the goal from day one.

Shoulder injury after shoulder injury didn’t curtail Kahui’s ambitions, with the Tokoroa-born midfielder making his All Blacks debut in 2008 at the age of 23.

Still, Kahui spent considerably less time on the field than he would have liked, with more than one season written off due to his seemingly endless injuries.

Come 2011, Kahui was finally able to stay fit, allowing him to assist New Zealand in claiming their first World Cup win in over two decades.

Given the midfielder-cum-wing’s childhood dreams, you would assume that a World Cup winner’s medal would be his proudest achievement as a rugby player – but that’s not the case.

“Obviously we hadn’t won [the World Cup] in so many years, there was a lot of pressure,” Kahui remembers.

‘Lots of pressure’ might be an understatement – no country is more fanatical about its rugby than New Zealand. It had been a constant thorn in Kiwis sides for years that their team, despite being the best in the world for season after season, hadn’t brought home the Web Ellis Cup since 1987.

You only have to look at the vitriol that Kahui’s Waikato, Chiefs and All Blacks teammate Stephen Donald faced in 2010 after making a bad mistake in the dying stages of a Bledisloe Cup fixture. 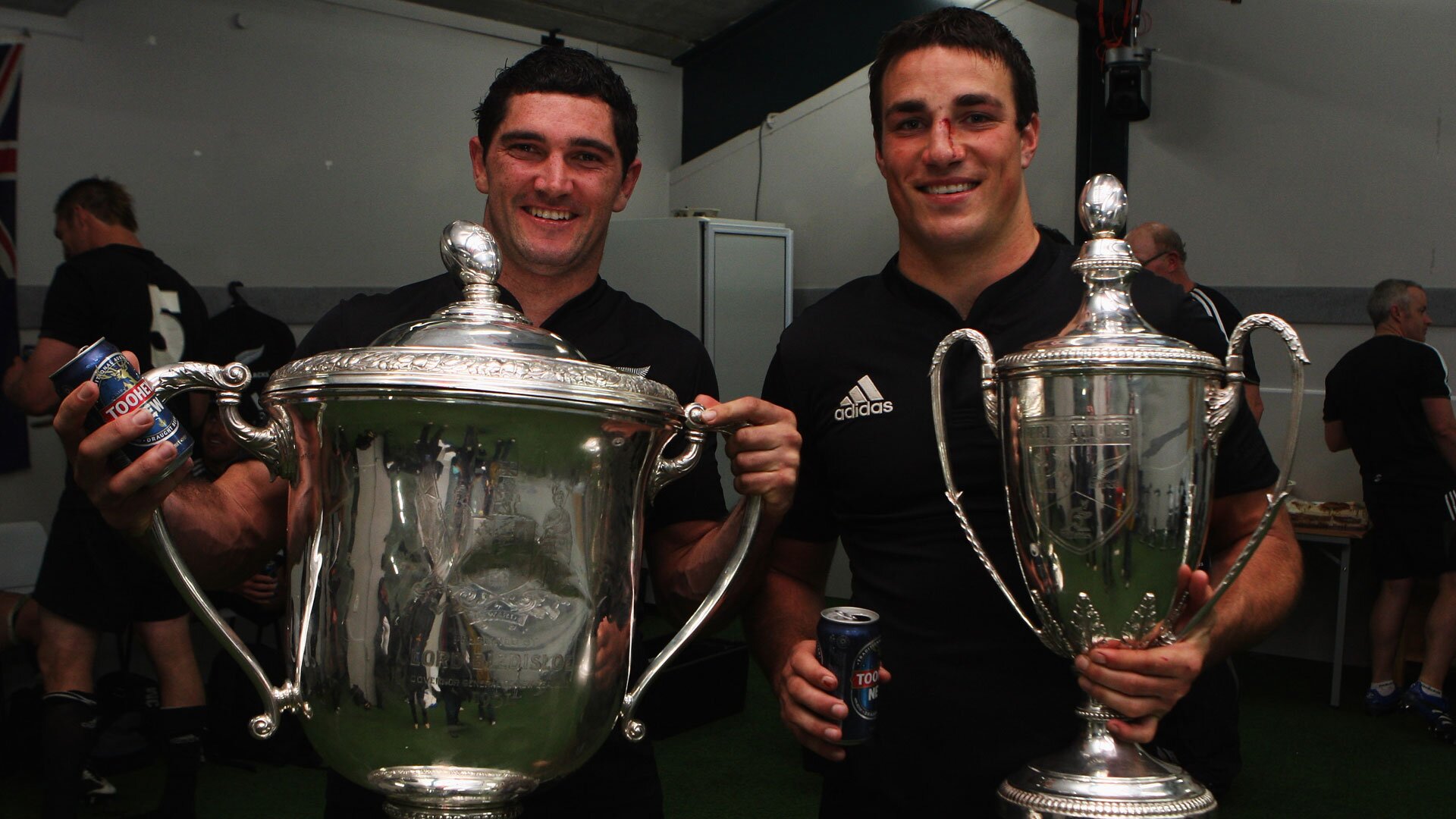 Waikato, Chiefs and ALl Blacks teammates Stephen Donald and Richard Kahui after securing the Bledisloe Cup and Tri-Nations trophies in 2008. (Photo by Ross Land / Getty Images)

New Zealand fans love rugby players when their winning, but it’s a completely different story when they’re not.

For Kahui, at least in the formative days after the 2011 World Cup win, what came was more a feeling of a relief; the All Blacks had finally got the monkey off their back.

The utter joy of the victory didn’t come until later but, regardless, that’s not the win that Kahui ranks as the highlight of his career.

A soldier not a general

Persistent injuries meant that Richard Kahui accrued just 17 caps for the All Blacks. Six of those came during the World Cup. Despite being on the professional scene for quite some time, he was always a relatively junior member of the side.

“When I was in the All Blacks, I was just a soldier,” Kahui muses.

“You have you generals – your Dan Carters, Richie McCaws etc – that were running the team.

“I was just a kid running around, doing my best.” 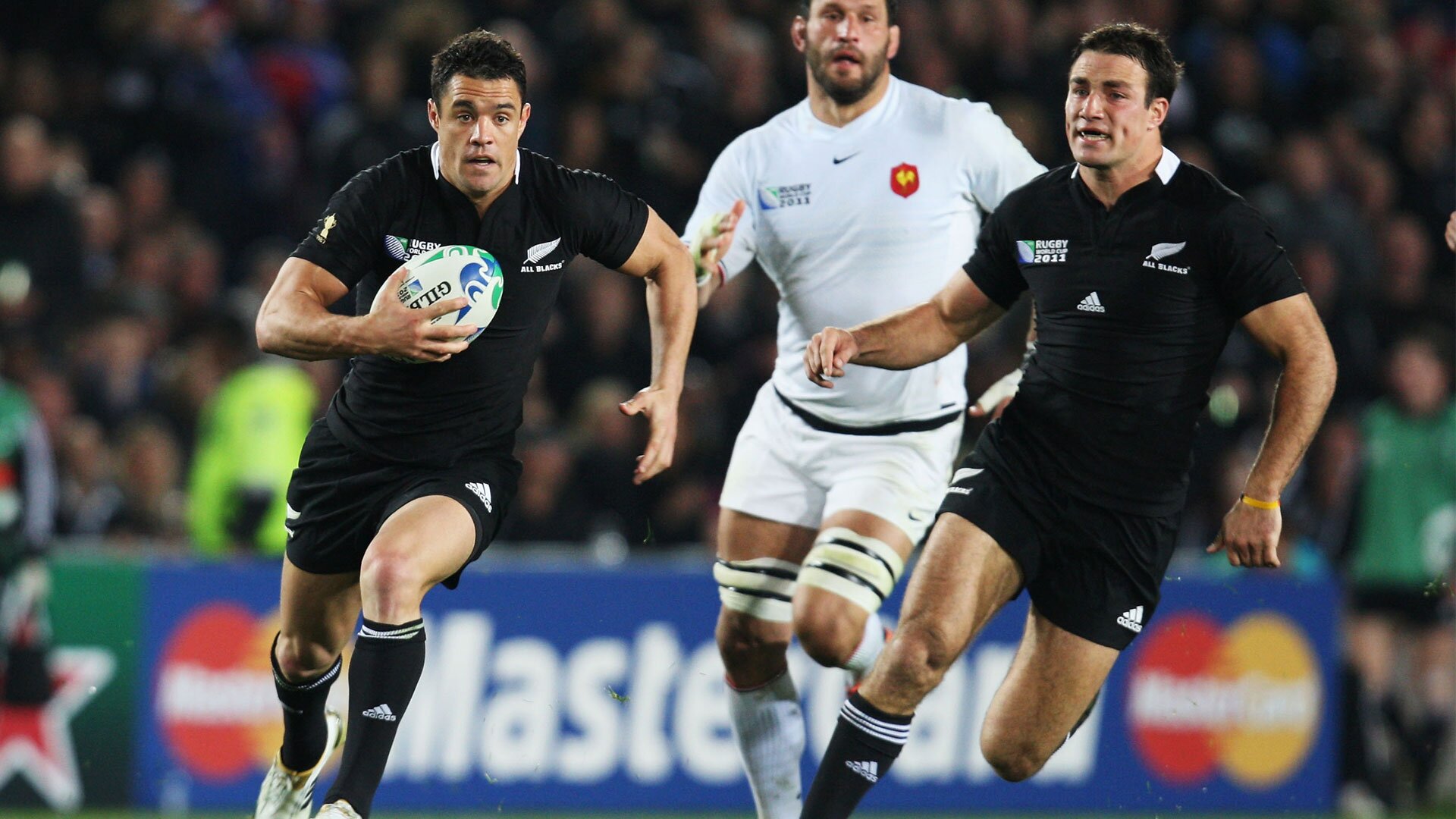 Richard Kahui’s first try for the All Blacks came off an inside cut from Dan Carter. (Photo by Sandra Mu / Getty Images)

Kahui’s best, as any All Blacks supporter will attest to, was pretty damn good.

Still, most of Kahui’s influence in the national set-up was on the field, whereas he took a back seat in the organisation of the team.

“I think the more responsibility you have within the team, you feel the bigger sense of achievement.”

It wasn’t at the All Blacks where Kahui initially made a name for himself, of course.

The blockbusting defender started out his Super Rugby career with the Highlanders in 2006 where he notched up eight appearances – primarily on the wing.

A year later he was called up to represent his local Chiefs, a side he managed to earn 60 caps for over seven seasons.

Richard Kahui’s 2007 season may have been cut short thanks to his first major shoulder injury, but a year later he came back with a vengeance, and it was that profitable 2008 Super Rugby stint with the Chiefs that earned him his first All Blacks call-up.

Despite a number of setbacks, Kahui still earned his stripes with the Waikato-based team and when they finally won their first Super Rugby title in 2012, Kahui was one of the more experienced players.

“With the Chiefs, I was in the leadership group and the attack group – we were putting stuff together all the time – so when you get the result you feel like a big part of that is you,” Kahui says.

That initial title was built on some astute coaching from Dave Rennie – in his first year as a head coach at that level – and his support team, including guru Wayne Smith. 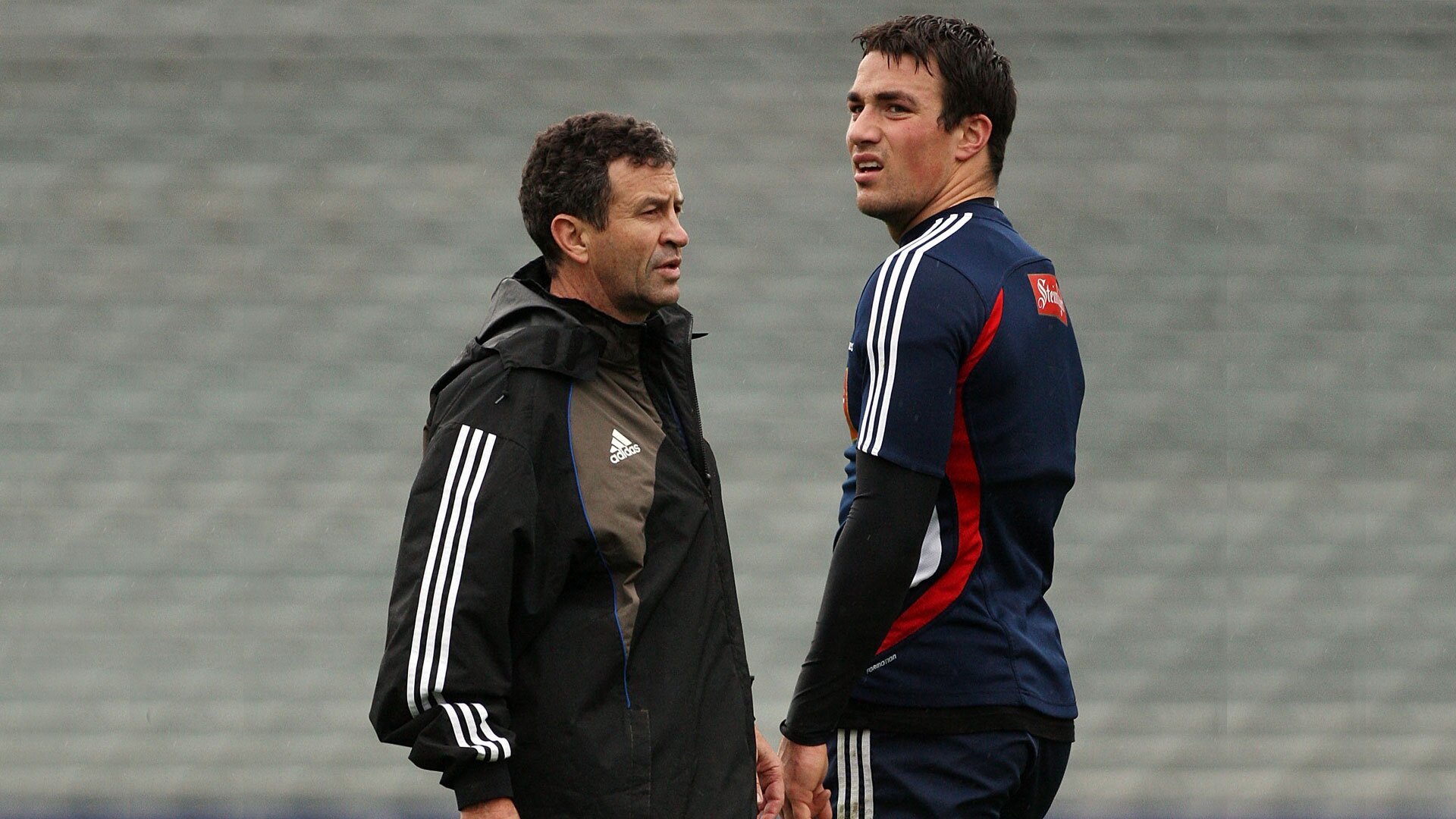 Coaching mastermind Wayne Smith and Richard Kahui at an All Blacks training session in 2008. The pair also worked together at the Chiefs in 2012 and 2013. (Photo by Hannah Peters / Getty Images)

The Chiefs coaching staff had taken somewhat of a ‘moneyball’ approach to recruitment that year, bringing in a number of young players who weren’t necessarily highly rated or hadn’t yet proven their capabilities.

“We didn’t have a team with many names in it,” Kahui reflects.

“Obviously we had Sonny [Bill Williams] and guys that are going to be some of the greats, guys like Brodie Retallick and Sam Cane. Aaron Cruden was unreal, so was Tawera Kerr-Barlow. They’re all All Blacks now but they weren’t at the time.”

Taking a team of relative unknowns all the way to the championship certainly ranks high on the list for Kahui, in terms of his career achievements.

Super Rugby is also a distinctly different competition compared to the likes of a World Cup.

“The World Cup is such a short thing, whereas in Super Rugby you’ve got to build something throughout the whole year because you’re inevitably going to have your losses and your wins.

“I really felt like, with the Chiefs that year, we actually built something that carried the team for the next three, four, five years. There are still parts of it you’re seeing a little bit of now.”

All that being said, come the finals series of both the 2012 and 2013 title wins, Richard Kahui found himself sitting on the sidelines, away from the action.

In May of 2012, Kahui’s season was cut short due to one of his many shoulder injuries. Almost a year later to the day, history repeated itself. 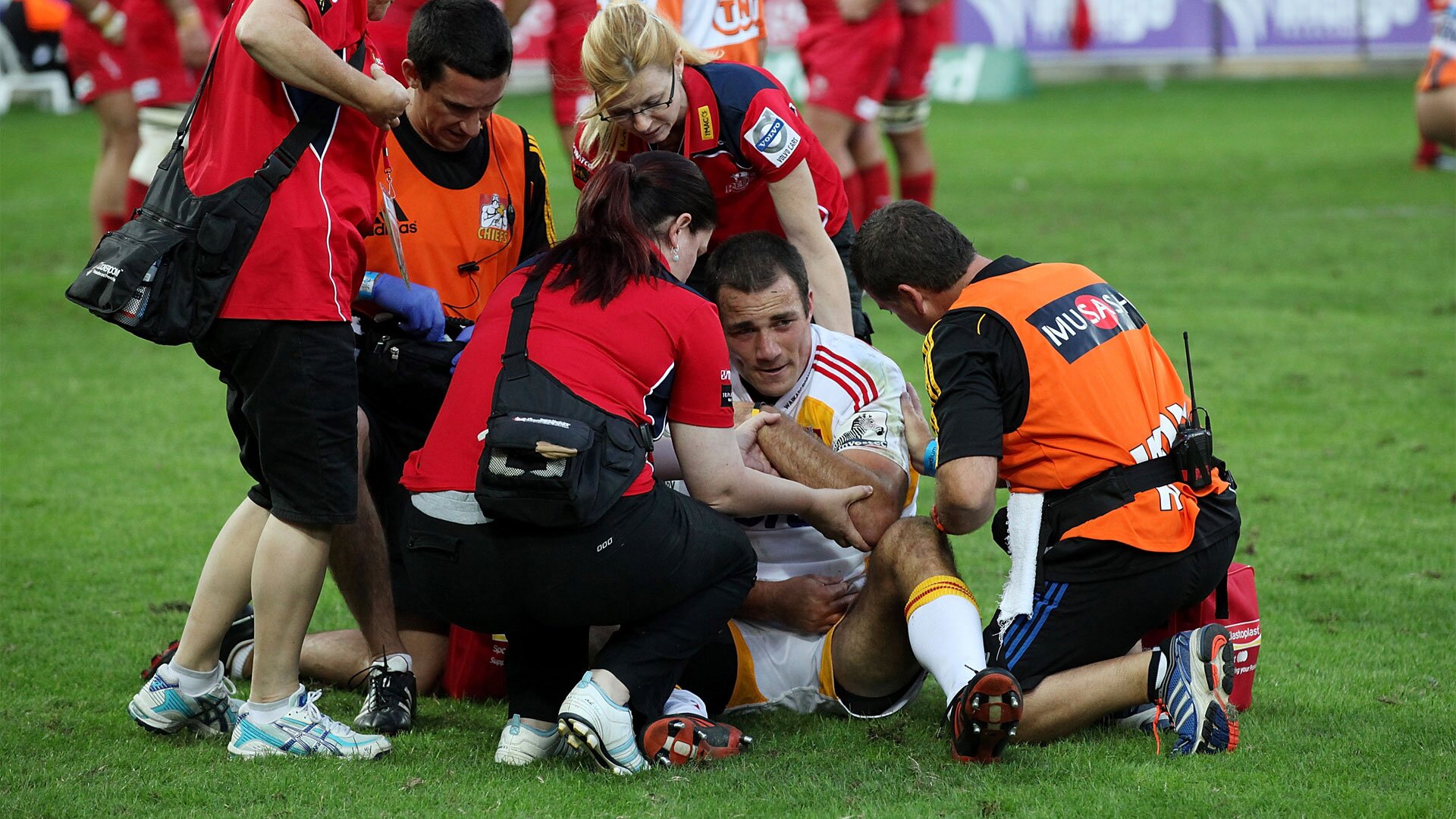 Richard Kahui’s career in New Zealand was plagued with injuries. His 2012 season was ended prematurely in a Super Rugby match against the Reds. (Photo by Chris Hyde / Getty Images)

“I didn’t play in either final which is obviously disappointing,” Kahui reflects.

So, with neither the Chiefs’ title wins nor the All Blacks’ World Cup victory taking out top spot in Kahui’s mind, what does he consider to be his most satisfying rugby accomplishment?

Look to the 2006 provincial season, when Richard Kahui first made a real name for himself on the professional scene as a 21-year-old.

Creating a legacy with Waikato

It’s become increasingly rare in recent times to see top All Blacks turn out in the current iteration of New Zealand’s provincial competition, the Mitre 10 Cup.

You have to look back to the mid-2000s to really see full-strength provinces on display, and that’s when Kahui announced himself as a player of immense potential to the wider New Zealand fan-base.

It was the year that Waikato took out the Air New Zealand Cup, beating Wellington 37-31 in the final. Along the way to their championship run, Waikato lost just once during the season – by three points to Otago.

“I think if I had to pick which [title] was the best, without making anyone angry, I would probably say that Waikato one.” 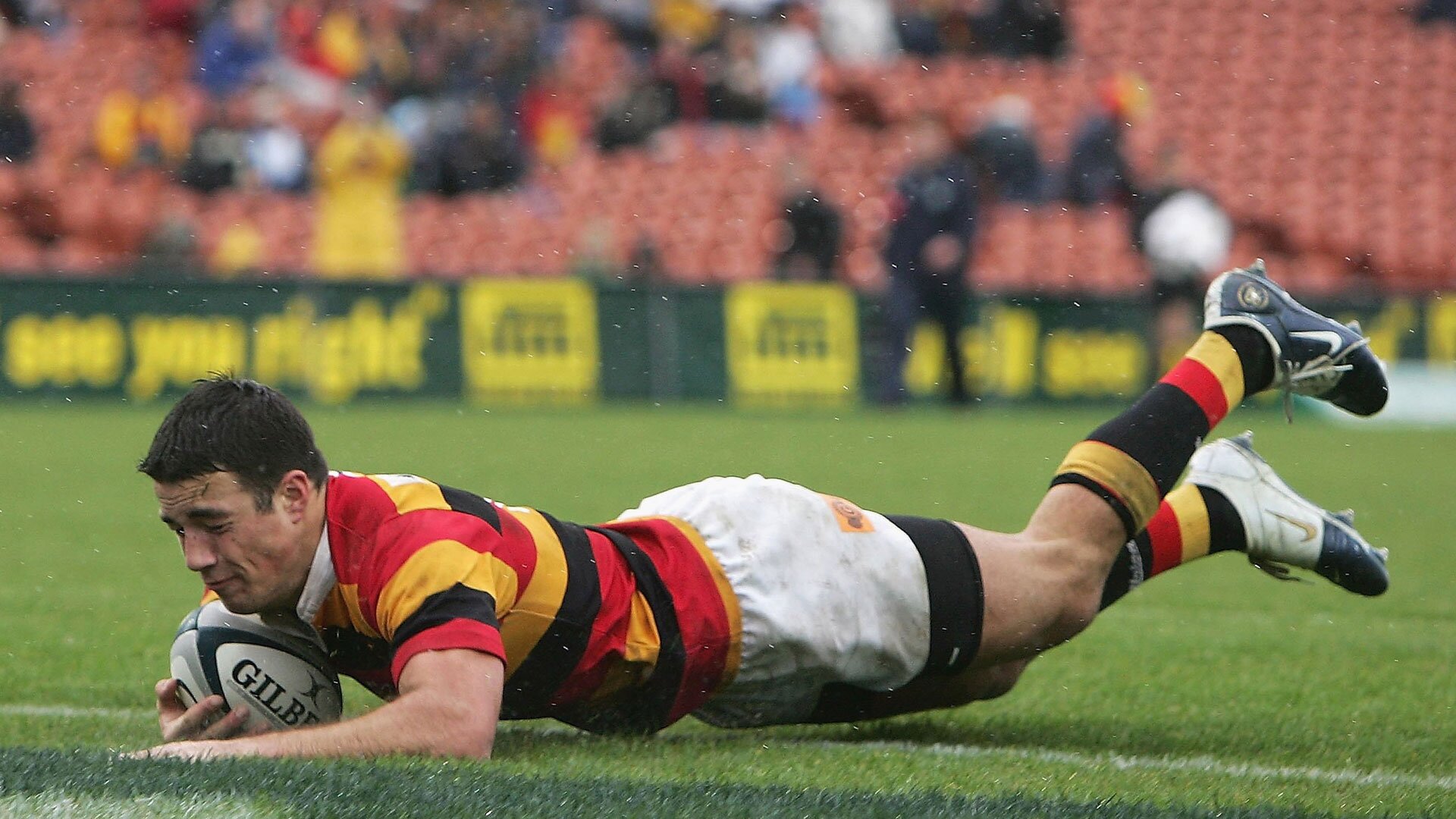 Kahui was the competition’s top try-scorer that year and also had a hand in the team’s tactics and strategy. He wasn’t just a solider like with the All Blacks, he was one of the commanding officers.

“That was the year us smaller guys put a lot of effort into how we were going to play and understood the defence. I was sort of running the defence as well, with Marty [Holah] and Batesy [Steven Bates].”

For a young player, only still in the early stages of a full-time professional career, it helped to be rubbing shoulders with the All Blacks that were littered throughout the top teams. You only have to look at the two squads that contested the final to see how different it is to today.

Wellington trotted out All Blacks Ma’a Nonu, Conrad Smith, Tana Umaga, Piri Weepu, Rodney So’oialo and Jerry Collins. The then-uncapped Cory Jane, who was Kahui’s partner on the wings at the 2011 World Cup, also lined up.

It was a similar story on Waikato’s side of the trenches.

“If you look at our starting lineup, there’s only one player there that didn’t play – or go onto play – international rugby. Everyone else did. Marty Holah, Mils Muliaina, Sitiveni Siviatu, David Hill, Jono Gibbes [as well as the likes of Stephen Donald, Byron Kelleher, Sione Lauaki and Keith Robinson]…

“Then we had Liam Messam, Aled de Malmanche and Brendon Leonard on the bench.

“That’s a lot of internationals.”

“I felt like we were blessed to have probably the last really good year of the provincial comp, where the All Blacks were still there. And they played pretty much the whole year.”

It’s not hard to see why Richard Kahui has such fond memories of that 2006 championship. It was that provincial competition that really catapulted him into the spotlight and he had the chance to not just run out alongside some legends of the game, but also work with them to form a plan to take out the trophy.

As far as seasons go, you’d struggle to find anything better.

“That year, that whole year, was probably the greatest of my career and set me on the path to playing for the Chiefs, playing for the All Blacks, and winning the World Cup.

“The sense of achievement was massive.”

This is the second in a three-part series on Richard Kahui – his life before, during and after he achieved his dream of becoming an All Black. Read part one here.