RUGBYPASS+ How Quade Cooper adapted to the Wallabies' weekly opposition

By Ben Smith
How Quade Cooper adapted to the Wallabies' weekly opposition
By
Ben Smith
1 year ago
InternationalAustralia
12:11am, 19 October 2021 Go to comments

The return of Quade Cooper has been one of the stories of the 2021 season, with the former Reds flyhalf making the most of a second opportunity to drive the Wallabies around the park.

The 33-year-old playmaker has played his role perfectly to provide stability, control and sound decision-making to Australia’s attack within the boundaries of the job he has been given, which has suited an older, more patient Cooper.

While some of the narrative suggests the risk-taking aspects of his game have been curtailed, like throwing cutout passes, this is not totally accurate.

Cooper is still throwing skip passes, but, when he does, they are sticking and when the play is simply not there, he hasn’t pushed a bad 50-50 ball or turnover-potential pass that often.

The sound decision-making and balance between risk and reward has been a hallmark of Cooper’s game in 2021.

As Wallabies head coach Dave Rennie has alluded to, the Wallabies have been using their big men to generate gain-line, which has allowed Cooper to take a backseat on early phase counts on set-piece attack launches.

The likes of Samu Kerevi, Rod Valetini and the wingers Andrew Kellaway and Marika Koroibete have been used heavily to carry tight on first phase, before forwards coming around the corner have bent the line back on second and sometimes third phase.

Most of Australia’s attack patterns work the same way over multiple phases to build an opportunity for Cooper to get his hands on the ball on latter phases with a planned strike move.

Len Ikitau’s (13) second try against the Springboks in the second test was a result of a screen play with the blind winger Koroibete (11) attached on the inside of the deep option Tom Banks (15). 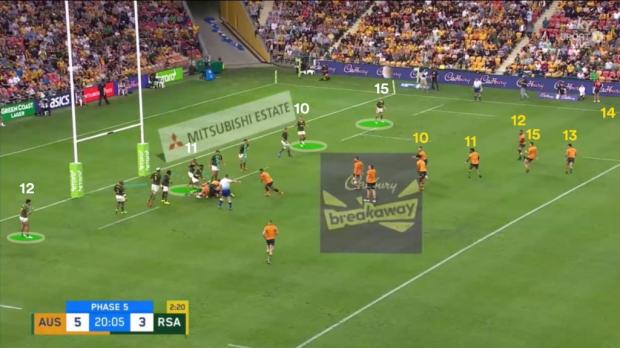 These late-phase strikes can be as simple as a basic screen pass, allowing Cooper to create opportunities for his outside men to finish off the play while not directly offering the last pass himself. Their general phase play shape allows Cooper to even throw double cutout passes, but they are to the deep option out the back which offers a level of safety from potential intercepts. 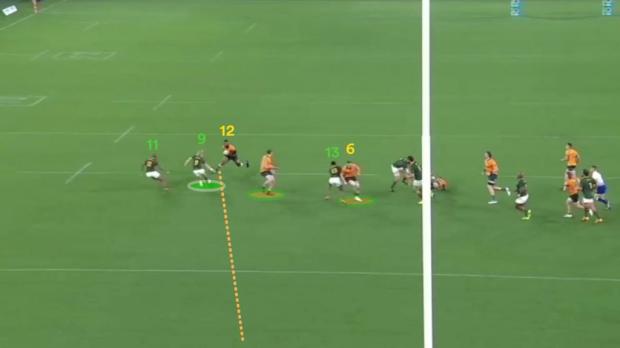 In the Wallabies’ system and with their planned plays, Cooper is able to operate within the safety that the design provides and still find ways to create width when the opportunity presents.

In the first test against South Africa, he completed 19 of 21 pass attempts. The two passes that hit the ground were recovered by the Wallabies, meaning there were zero turnovers from Cooper’s involvements orchestrating during phase play.

Despite not turning the ball over, 47 percent of Cooper’s completed passes skipped one or more players, with 53 percent hitting the next man outside of him. He played flat 74 percent of time and passed deep to a secondary option the other 26 percent.

This shows there is still variety in Cooper’s passing game but he has provided a level of stability by executing nearly everything, reducing turnover-worthy plays.

That has enabled the Wallabies to keep picking up points with key possessions and get reward for their play.

On this planned third phase opportunity attacking South Africa’s line on the Gold Coast, Cooper didn’t like the picture and simply pulled back the pass and lived to fight another phase.

The Wallabies end up with a penalty a few phases later from the possession and add three more points to the scoreboard. Turnovers in these situations would have hurt across both tests against South Africa.

In the second test, he only made seven total passes. We saw a continuation of his ‘preservation’ decision-making, which led to seven carries – equal to as many times as he let the ball go.

If the play was not there, he wouldn’t risk losing possession by pushing a low percentage pass.

On this second phase switch play from a lineout he assessed his options, gave enough time to for something to develop but decided to keep the ball safe and sacrificed himself near the last ruck so his support could get there.

Despite only getting a handful of opportunities to make a play in the test, Cooper showed the discipline to preserve Wallabies’ attacking possessions instead of going for all-or-nothing outcomes.

Yet from those seven passes, five led to gain line wins for Australia, two led to line breaks and one of them eventuated into a try to Ikitau through the strike play. He was still very effective from the selective decisions to pass.

The game plan against Argentina was very different, as the Wallabies opted to play a wide-wide game that looked to stretch the Pumas frequently, hitting the edges within two phases or less with just one settler phase in the middle channel.

As a result, Cooper was throwing wider passes to hit his second forward target in the middle of their phase play shape, or swinging it out the back on occasion with another double skip pass swinging it deep.

The second test on the Gold Coast against Los Pumas offered Cooper’s most productive attacking performance of the Rugby Championship with a very expansive passing game.

He completed 22 of 23 pass attempts, with one direct turnover when Taniela Tupou tried to catch a ball on the inside that was intended for the next man in.

A whopping 65 percent of his passes were cutout balls missing one or more targets, while 87 percent were flat only going out the back 13 percent of the time.

His best passage of play during the entire tournament came early in the second half as he patiently orchestrated Australia’s attack using a variety of passes.

They had already scored from this lineout play in the first half through Kellaway (11), where the hooker received the ball back on a slingshot line coming around the corner.

Folau Fainga’a (2) had options inside and out, but, on this occasion, played a short ball to Valetini (8) who broke through the line untouched before delivering Kellaway (11) the final pass inside. In the second half, they decided to play a variation of the same play and throw the ball out the back to Cooper (10) to catch Los Pumas wider with a cutout pass after they had been breached up the middle the first time. 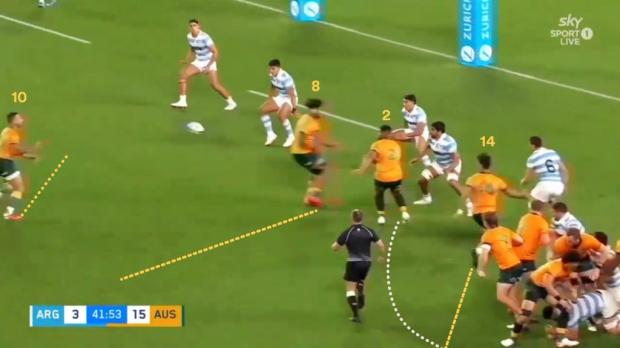 Quick hands from Cooper immediately threw the skip pass to Ikitau (13), but the pass dived a bit and the centre had to reach for the catch, slowing down the momentum. Ikitau took the contact and set-up the first ruck. On the next phase, Cooper took on the line, getting his second touch in as many phases, but decided against an offload and went to the ground to recycle.

The Wallabies used a third phase to get all the way into the five-metre channel towards the left-hand touchline side, which set up a huge open side to work back right with.

They fell into their 1-3-3-1 shape with a carry off 9, before three forward runners outside 10 to set-up a ruck in the middle. Cooper (10) fired a flat pass to hit his second runner James Slipper (1) who carried into the Pumas midfield. Of importance on this phase is the off-the-ball work of Kerevi (12), Kellaway (14) and Jordan Petaia (14) at the top of the screen, all of whom were busting to get across field to load up for a planned strike on the next phase.

As Slipper fought for more yards, Cooper confirmed the call with Ikitau (13) that the play will be run. The three Wallabies backs worked themselves into a position to help overload the far side.

It was just great hustle to create mismatches and a numbers advantage in order to play a full Wallabies backline against a handful of Pumas, including tight five forwards.

While Cooper was set-up as the first receiver, it was Ikitau who received the ball to run a sweep play to get Cooper around the edge with options in tow. Some incidental blocking by Reece Hodge (15) on Lucio Cinti Luna (13) gave the Australian No 10 some room to orchestrate the play.

Cooper squared up wing Emiliano Boffelli (11) while, at the same time, flyhalf Santiago Carreras (10) made the wrong decision to drift outward to take Petaia (14), leaving Kerevi (12) free to ghost through the line. 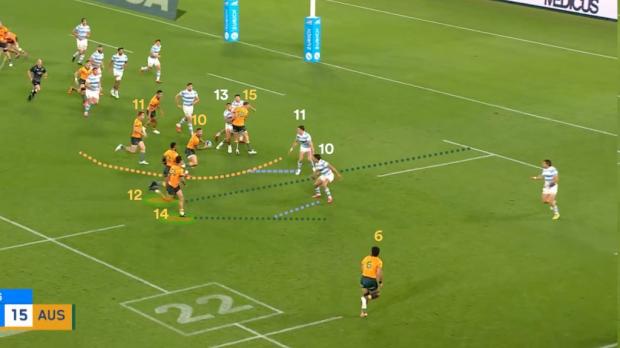 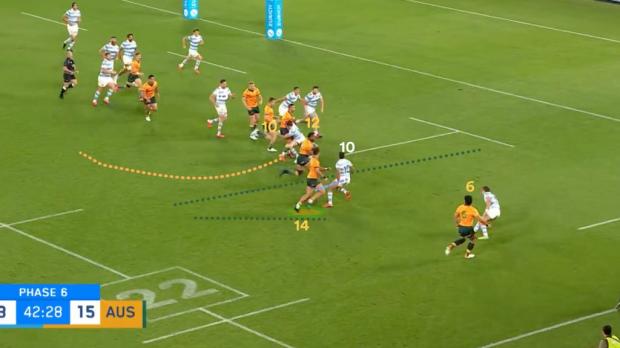 It was a beautiful piece of play by Cooper, who used a double-pump as a guise before selecting the right option and playing a short pass to Kerevi into the gap for a line break and try.

All of this was made possible by patience through the lead-up phases and extra hard work from the Wallabies backs to get in position and outwork Los Pumas.

Cooper was involved heavily throughout the sequence, using passes short and long, and ensured the Wallabies got a second bite at the apple after the first strike play was stopped. Then executed the play perfectly making the right read and demonstrating his sharp vision as a playmaker laying on a try for Kerevi.

What’s more, the next time they were back down in the same position they ran the first phase strike play once again and the second time around struck another blow.

Cooper’s cutout pass was right where it needed to be this time, while Hodge played a little tighter at inside centre to keep the defence interested. A brilliant back-handed offload from Ikitau gave Kellaway a walk-over try.

His conversion attempt would be has last involvement in the game, heading off in the 60th minute with the Wallabies up 32-3.

Nearly everything the Wallabies were doing up until that point fell apart without Cooper on the pitch as the bench failed to operate anywhere near the same level. Los Pumas scored twice in the final quarter to cut back the final score to 32-17.

The timing of the Wallabies’ play is in sync with an experienced 10 like Cooper, which is why he can’t be discounted from being a key part of this team for the foreseeable future.

Cooper had Australia’s attack firing in a way that hasn’t been seen in years with clinical execution, sharp organisation and varied passing that showed he can still throw a long ball or two just as much as distribute.

He has played conservative when needed, and up-tempo and expansive when needed, changing styles throughout the Rugby Championship to suit whatever game plan the Wallabies had.

And most importantly he was one of the safest players, minimising costly turnovers and made sound decisions.

The Wallabies best end-of-year tour result of the last decade came in 2013 when Cooper was in-form and the starting flyhalf, when they won four out of five for an 80 per cent return.

While four from four might be a tall ask, there is no reason why Cooper can’t help the Wallabies to a successful November once again.