'There's a chance you might not play rugby again': Bryn Gatland's journey from heartbreak to Highlanders hero

It’s been 13 months since Bryn Gatland was told there was a very real chance he’d never be able to play rugby again.

In May last year, Gatland’s leg was trapped underneath a mass of Highlanders and Sunwolves bodies in a Super Rugby match played in Tokyo. The damage to his foot and lower leg was so severe that Gatland was instantly ruled out for the rest of the season and there were very real fears that the first-five’s professional career was over before it had really started.

Barely a year later, and Gatland has just reminded the public what he’s capable of when fit and healthy by slotting a 35-metre drop goal to earn the Highlanders a win over the Chiefs in Dunedin.

The Sky Sports NZ team talk about all the action from round one of the Super Rugby Aotearoa competition.

“That was my first long term injury,” Gatland told RugbyPass of the damage he sustained against the Sunwolves at Prince Chichibu Memorial Stadium.

“I got a bit of a scare, actually, from the first feedback I got down in Dunedin. The first thing they said was, ‘It’s a pretty nasty break and there’s a chance you might not play rugby again.’ Obviously, I understand they have to give you a worst-case scenario just in case but when you’re only 23, it’s not what you want to hear.”

Gatland sought a second opinion and the prognosis was infinitely more positive; the Highlanders pivot was still destined for a lengthy stint on the sidelines, but his long-term future looked more optimistic.

“With us being pretty competitive and driven players, you tell us one thing, we’ll tell you another,” Gatland said.

One of those people was Warren Gatland – Bryn’s father and Wales head coach at the time.

“I think I saw an article that was like ‘Warren Gatland dashes back for horror foot injury of his son’ or something like that,” laughed Gatland. “You would have thought I had died.

“I think he was planning on coming back around that time and when that injury happened, I think he just came back a little bit earlier just to spend some time with me and help my mum out as well, which was good. It was good to have him back.

On Saturday evening, Gatland took the field in the 60th minute for the first time in a professional fixture since he’d injured his foot and consigned his father’s Chief’s side to a 28-27 defeat – but Bryn was never even supposed to play in that match, only receiving the call-up after an injury to Josh Ioane. Mitch Hunt, who was originally named at fullback, was shifted into the first receiver role and Gatland came onto the bench.

“It was an interesting week for me – I only found out Thursday afternoon that I was potentially playing because Josh had a bit of a niggle,” Gatland said.

“On Friday, went to the captain’s run and it was confirmed then but I hadn’t told anyone because first-five is obviously a pretty pivotal position. Mitch moving from fullback to 10, it’s something that the Chiefs may or may not have potentially had a game plan for, so I didn’t want to compromise that.

“About halfway through dinner on Friday night, I was catching up with mum and dad, dad got a text from someone he knew saying that they’d heard Josh was out and I was on the bench.

“Mum was real excited but dad was like, ‘Why didn’t you tell me?’ – but he understood why and he was just stoked for me because he knew how keen I was to get back out there and all I wanted was to get my rehab done and get back out on the field.”

While Gatland Senior would have been proud to see his son back on the pitch after a pretty tough year, he probably would have managed without Bryn potting the drop goal that won the Highlanders the match.

“At dinner, I had said, ‘Look, I’m going to come on and get a drop goal to win the game‘ – but I was obviously just completely joking,” Gatland said. “When I saw him after the game, we had a laugh and he said a couple of words to me that I won’t repeat but I can tell you he wasn’t very happy with the result in the end. He was obviously pleased for me though, on a personal note.”

Other than just being a supportive figure, Warren played a major role in helping Bryn get back on the playing field, including inviting him to train with the Wales national team in Japan last year during the Rugby World Cup. 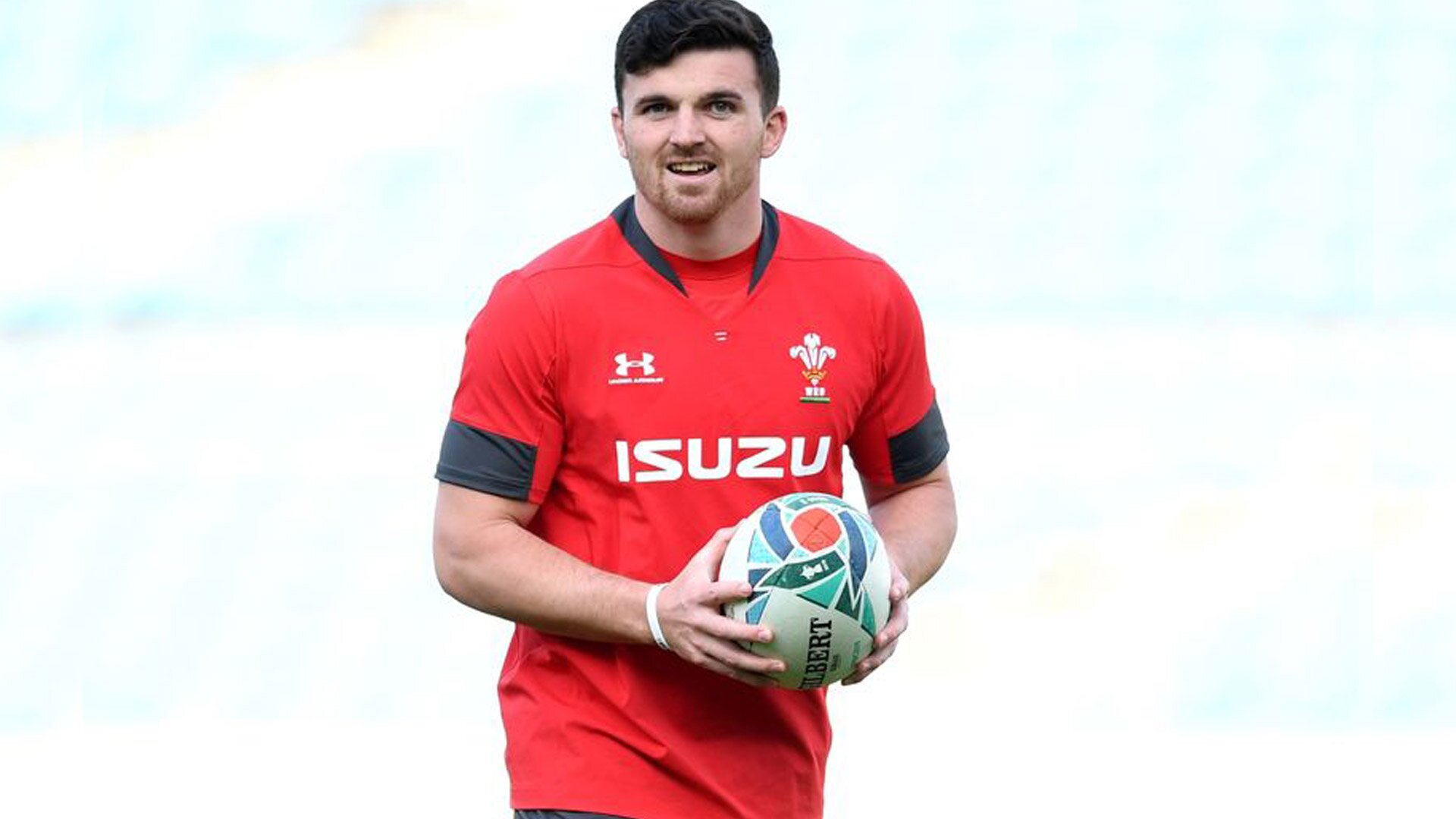 There was a little bit of a twist to the young pivot’s return to training, though.

“Harbour were just about to start to kick off their season but, because I wasn’t able to play, they were happy for me to go over and be a part of dad’s last campaign with Wales,” Gatland said.

“The funny side was that my first actual training back was on the same field that I broke my foot on in Tokyo, it was almost like a bit of a sick joke I thought he was playing on me. I didn’t know we were training at that stadium and then we turned up and I was like, ‘Okay, this is interesting’ – because six months ago I was lying out there with a broken foot. That was actually quite cool in a way, once I got those jitters out, I was fine.”

Fast forward to Saturday night and Gatland hadn’t even been expecting to muster any minutes in the opening game of the Super Rugby Aotearoa season, given Hunt and Ioane’s presence.

"Even just throughout training, we’ll have a stoppage and one of the coaches will just go, ‘Right, here you go,’ then fire you a pass for you to take a drop goal."

Drop goals are on the mind for the #SuperRugbyAotearoa sides – is it any wonder why?https://t.co/c0bJTs3P2v

Instead, he was counting on getting an opportunity due to the massive physical toll that playing NZ teams week-in and week-out would likely have on his teammates.

“You usually expect the injuries are probably going to come from games or just wear-and-tear but obviously this one was a bit of a different one,” Gatland said. “It’s unfortunate for Josh, he had a bit of a groin strain, which is hopefully not too bad.

“It’s opened up the door for me to get back out there and get my first professional game in 13 months so I’ll just take what I can get there and even getting 20 minutes off the bench, I was pretty happy and excited with that.

“Aza and Browny [Highlanders coaches Aaron Mauger and Tony Brown] and stuff congratulated me after and Aaron said to me, ‘Well done, you deserved that moment because you’ve been training well.’

“I was just stoked with the trust from them because it was a close game when I came on and there were a few nerves building up given it had been so long for me. I would have been pretty happy to even just get out on the field, let alone the way it finished. It was one I definitely won’t forget – that’s for sure.”

Ioane’s injury likely won’t keep him out of action for too long and it helps that the Highlanders have a bye coming up this weekend.

All of a sudden, Mauger is going to have three healthy playmakers to select from and even taking the intensity of the competition into consideration, first-five isn’t exactly a position you can afford to switch players in and out of on a weekly basis.

“Your 9s and your 10s, you don’t want to be rotating them too often because they are your game drivers and your decision makers,” Gatland said. “Loose forwards, locks, props and outside backs, you can make a few changes, give guys a rest and stuff and it hopefully won’t make too much of a difference but those 9 and 10 positions are absolutely critical as far as the way the team runs.”

While a fit and healthy Ioane may be the favourite to take the reins moving forward and Hunt has spent the better part of the year with 10 on his back, Gatland will be doing everything he can to challenge them for the playmaking duties.

His match-winning moment over the weekend will have certainly put his competition on notice.

When Gatland was first signed by the Highlanders for the 2019 season he was expected to duke out a three-way battle with Ioane and Marty Banks for the starting 10 jersey but his injury put an end to that. A small niggle sustained at the start of this year also prevented him from putting too much pressure on the other first fives to kick off 2020 but now that he’s fit and firing, he’s ready to fight his way back into the team.

“I obviously just need to keep grinding away and wait for that chance to prove and show that I can be out there and perform,” Gatland said. “We’re pretty competitive players, we’re all putting in the hard work in training and, obviously, the main reason for that is to get on the field. I’ll keep putting my best foot forward – I’m not just sitting back and waiting.”

With seven more rounds of ultra-competitive rugby still to play for the Highlanders in the Super Rugby Aotearoa season, Gatland will certainly have further opportunities to press his case for selection and his performance on Saturday showed that he’s more than up to the task, despite spending plenty of time on the sideline recently.

While there’s more to a first-five’s game than simply sinking outrageous drop goals, Gatland’s coaches can rest assured that he’s a man they can trust to close out tight games – which we’ll likely see plenty more of as the competition continues.

'There's a chance you might not play rugby again': Bryn Gatland's journey from heartbreak to Highlanders hero

The Breakdown | Episode 21 Next