Ulster: 'Bookies written us off' Next
Back
PRO 14

Adam Ashe would lie awake at night racked with anguish, the pain in his shoulder dwarfed by the torment he felt at emptying himself for the Glasgow cause and seeing his toil amount to nothing. When Dave Rennie took charge of Warriors in 2017, the Scotland back row quickly became a go-to man.

His ballast on the carry and deft handling were precious assets. But in the seasons that followed, he tumbled down the pecking order like a boulder down a cliff. Rennie reckoned he wasn’t nasty enough in the tackle, his performances no longer fizzed with sufficient aggression and dynamism. Ashe argues he was doing everything possible to fight his way back into the Glasgow squad, but there was no compelling the New Zealander.

Things came to a head last year when Ashe damaged an already troublesome shoulder in an inter-squad match, and still put himself in the firing line for the pre-season friendly against Ulster. It set off a chain of events that led to him leaving Glasgow this summer with a year left on his contract.

“Dave asked me after the internal game how I was feeling, I said my shoulder was at 60-70 per cent but I’d play against Ulster because I understood we were short of numbers because so many boys were at the World Cup,” Ashe told RugbyPass. “I played in that game and Dave said, ‘Look, I feel you didn’t play as well as you could, you weren’t physical enough in the tackle’. It was pretty gutting to be honest with you because he knew my shoulder was hanging on.

“At the best of times, my shoulder needed to be managed. The coaches are asking me in training to be more physical and show them that I have been working on that. And then there’s an internal game and I make two of the biggest tackles of my career and nothing happens. When I find out that I’m not involved for the next few games, I’m just feeling pretty demoralised.”

Thanks to all of the people who have shown support to me throughout my time at @glasgowwarriors I have had a fantastic 8 years at the club. This club has played a huge part in shaping me as a person. I have learnt so much. I’ve got to know a lot of great people whether that being teammates, supporters or associates of the club. The energy that comes from the crowd at Scotstoun is amazing. I will miss playing in front of you. Looking forward to a new chapter in my career. Adam

Ashe soon became captain of the Glasgow bin juice brigade. His minutes were desperately limited, in part by more injuries but mostly by head-wrecking non-selection. In total, he made three appearances last season, the most recent coming off the bench against Edinburgh ten months ago.

“There were definitely times where I was thinking, what am I doing here? Why am I putting myself through this when I’m getting nothing in return?” he said. “It got to the point where I was like, you know what, I just can’t continue like this.

“My shoulder was playing on my mind and if I was going to be doing what they were asking me to do, and it’s exhausting me to get to that level, it just becomes a battle of is this worth it or not? No matter what I did, I couldn’t get back in the door. With other coaches, it’s easier to work your way back in but with Dave, it’s very, very hard.”

Despite the angst at Rennie’s stance, there is no great ill will towards the coach or Glasgow where Ashe has spent his entire professional career to date. He could be searingly honest with the Kiwi but at times it felt like banging his head against a brick wall. He picked up a shovel and grafted away in the semi-professional Super6 to no avail.

“I went back to the Super6 and played well. I trained well whenever we had training, I felt like I had done everything he asked me to do, and the things he felt we were missing in the squad were strengths of mine,” Ashe said. “Dave wasn’t condescending about the Super6, but he said the standard wasn’t anywhere near the professional game so it wasn’t a fair reflection of how a pro player was faring.

“There were other players who he said were in because they were leaders. To which I said, what you’re asking me to do and improve on, I feel like I’m doing better than them. It didn’t add up in my head. I felt really frustrated and angry and there was many a sleepless night during that time. But although I never got what I wanted, I was very appreciative that I was able to have those honest conversations with him. Dave is a top man and I have a lot of time for him regardless of our disagreements.”

Ultimately, Ashe’s shoulder forced the issue. He was hurling weights about the Scotstoun gym six months ago when he felt an almighty pop in the afflicted joint. An operation was required, but then Covid-19 struck and delayed the surgery until early July.

Ashe reckons he is three weeks away from being able to train fully and Glasgow are allowing him to complete his rehab at the club. Amidst all of this, Danny Wilson took over from Rennie and made it clear that Ashe was not part of his plans.

“I don’t know if Danny had the best impression of me from the start,” he said. “I first met him in the Scotland camp when he was forwards coach in 2018. I was in the Six Nations squad training Monday-Thursday, but I wasn’t getting a game.

“Other players were being brought into the squad who had been on holiday and they were playing ahead of me. To be honest, I was pretty fed up. I’d played a lot of games for Glasgow, I was missing out on time off, and I was getting my head kicked in by the likes of Grant Gilchrist Monday, Tuesday, Wednesday in mauls and holding pads.

“I felt like I was a punchbag and given the fact I was already feeling pretty angry, I was missing out of time off and I was getting my head kicked in, I wasn’t in a good headspace and I wasn’t particularly happy to be there. That was reflected in the way that I was carrying myself and Danny probably picked up on that.”

This is possibly the worst time ever to be a free agent as coronavirus savages the budgets of clubs and unions the world over. Ashe is 27 and capped, which will not make his prospects any brighter, even if his last of six Scotland outings came in 2015.

He is encouraged, though, by the conversations he has had with potential suitors. There has been interest from Japan, England and the USA, and he yearns to fulfil a deep-rooted ambition to play overseas. “I have got a lot more to give,” he said. “But I’m not going to settle for something I’m not happy with. I’d love to be able to go to a club and really contribute for the next few years.”

"You should see our inbox. We could make a World XV five times over with guys who are using our products"

Meanwhile, he is finally able to promote the cannabidiol (CBD) business he founded with former Glasgow teammate Grayson Hart in 2018. CBD comes from the hemp species of the cannabis plant, which contains only very low quantities of the psychoactive THC compound that causes the user to feel “high”. CBD does not appear to be addictive and is widely used as an alternative to painkillers, to combat seizure disorders, anxiety or improve sleep quality.

Ashe and Hart launched PureSport CBD, aiming to create a watertight range of products for athletes who simply cannot risk failing a drugs test. They sought extra testing and anti-doping accreditation to ensure their products contain no banned substances.

While under contract at Glasgow, Ashe was not allowed to tout his business. Scottish Rugby were understandably cagey about this emerging industry and the myriad brands and promises on the market, but he feels it is time they re-evaluated their rules. The union says it only follows UK Anti-Doping advice on assessing the need, benefits and risks of taking CBD.

“You are constantly in pain as a rugby player and at some point, organisations have to move on and figure out what is a better option than using painkillers that have side effects that we all know about,” Ashe said. “In my opinion, CBD is natural, non-addictive and extremely effective.

“That the blanket ban on the promotion of CBD wasn’t looked at again was frustrating to me. It definitely took its toll on our business in the early stages. I want to thank Grayson because he has been an absolutely massive help in trying to share my load and do as much as he can with the business and marketing. I owe a lot to that guy and now it’s my turn to step up.”

These past few years have been riddled with anger and exasperation, but at last, there is light now at the end of the tunnel. 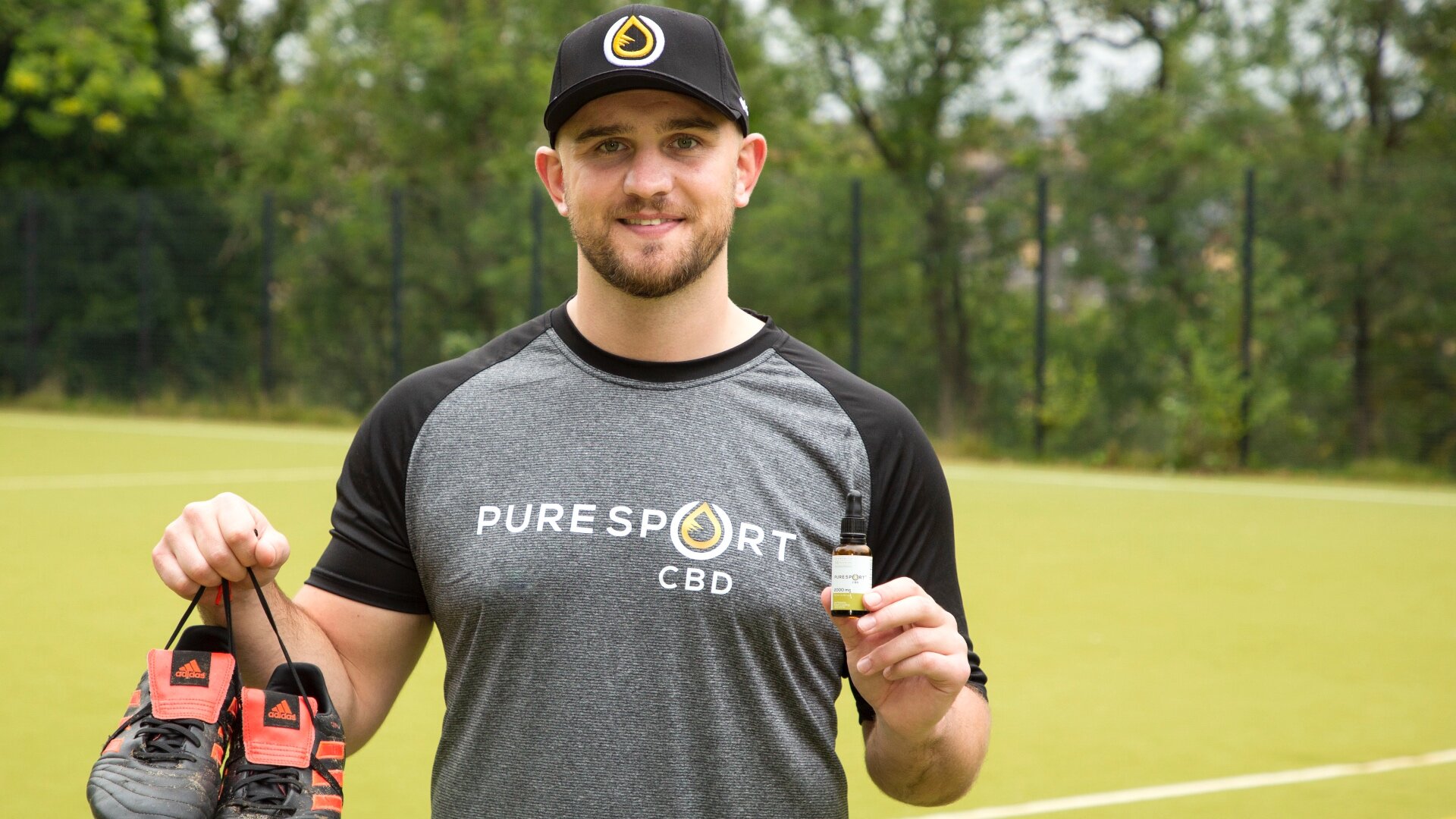