The British and Irish Lions will collide with South Africa in a series decider next Saturday after the Springboks emerged emphatic 27-9 winners from an ugly second Test at Cape Town Stadium.

A grisly spectacle disfigured by repeated stoppages saw the Lions build a deserved 9-6 interval lead through three Dan Biggar penalties, but having been largely bossed until that point the world champions began to snarl in the second half.

Makazole Mapimpi crossed to propel them back in front and then Lukhanyo Am touched down as they capitalised on excellent kicks from Handre Pollard and Faf De Klerk.

A feature of the match was the world champions’ growing control of the air as the Lions struggled to deal with the barrage of kicks raining down on them, while up-front the home pack muscled up in a dominant 40 minutes.

Unlike in the first Test that was lost 22-17, the ‘Bomb Squad’ had the desired impact from the bench, and the size of the win as the Springboks powered over the finishing line with their forwards rampant suggests they were undercooked for the series opener seven days earlier.

A major outbreak of coronavirus severely disrupted their build-up but by full-time of this rematch they had rediscovered their swagger as the Lions fell away at an alarming rate.

South Africa were lucky to see Cheslin Kolbe avoid a red card after he took Conor Murray out in the air, while a high tackle by De Klerk, also on Murray, was given only brief attention by the officials.

Otherwise it was a fine performance by referee Ben O’Keeffe, who was subject to unprecedented scrutiny after Springboks director of rugby Rassie Erasmus released an extraordinary hour-long critique of the officiating in the first Test. 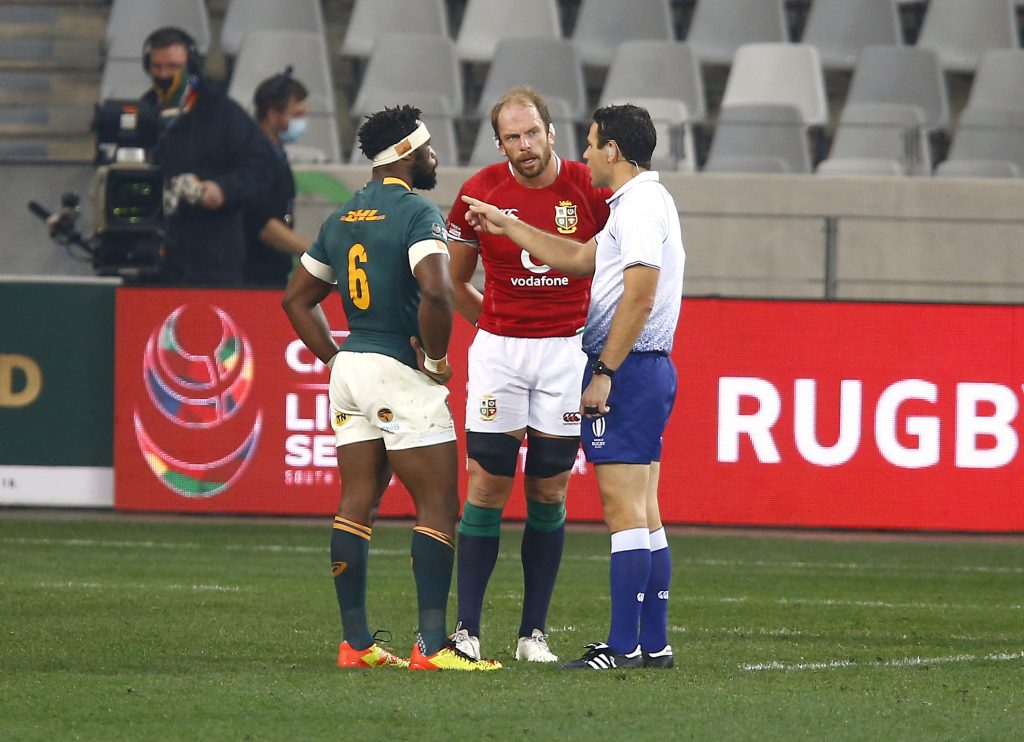 O’Keeffe was calm and composed throughout a fractious match that was constantly interrupted by reviews on a huge number of incidents, with the first half alone lasting over an hour.

In a sign of the conflict to come, tempers flared as early as the third minute with Alun Wyn Jones and Eben Etzebeth locking horns after a South African maul was halted just short of the line.

O’Keeffe seized the opportunity to assert his authority to the captains and a cagey opening was under way with Pollard and Biggar exchanging penalties as the packs tore into each other.

Kolbe came off worse in a head-on head collision with Tom Curry that he instigated, fortunately escaping any sanction, as the Lions continued to edge a ferocious opening quarter. 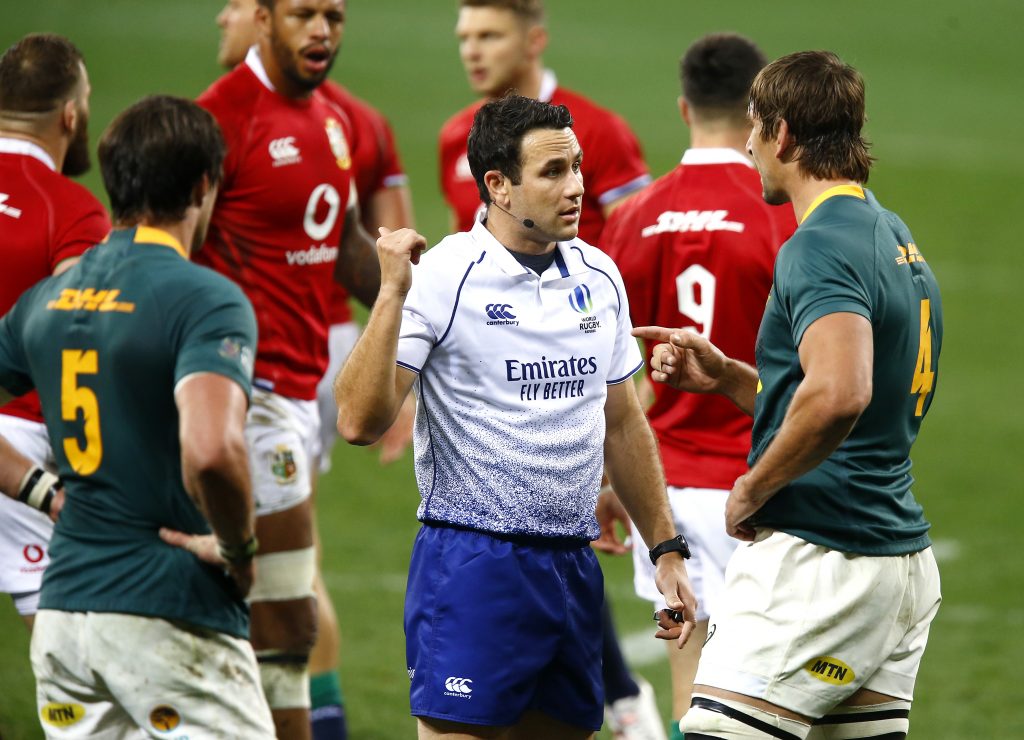 Biggar was on target with a second penalty and the bad news began to pile up for the Springboks as Pollard missed the posts and 2019 world player of the year Pieter-Steph Du Toit departed with a shoulder injury sustained during an earlier tackle by Duhan Van Der Merwe.

It was a contentious challenge that ended Du Toit’s match but Van Der Merwe did not escape O’Keeffe’s attention for a trip on Kolbe that was punished with a yellow card.

The advantage was rapidly wiped out, however, when Kolbe took Murray out in the air and was also sent to the sin-bin where he could reflect on his luck that the card was not red.

Courtney Lawes and Maro Itoje pinched home ball on successive line-outs as the absence of Du Toit began to bite at the set-piece.

The Lions were now on top as they camped on South Africa’s line, applying pressure with the line-out and then scrum before Robbie Henshaw was unable to ground the ball over the line because of Siya Kolisi’s intervention after grabbing Murray’s kick.

Biggar’s boot gave the tourists the lead for the first time but the second half had barely begun when Pollard hoisted a kick to the wing for Mapimpi to collect and score.

Momentum was growing behind South Africa and a powerful maul swept them forwards before De Klerk grubbered for Am to score, although he did not appear to have full control of the ball.

It was foot on the throat time as Pollard rifled over two penalties and the Lions looked a spent force, unable to match the Springboks’ physicality.